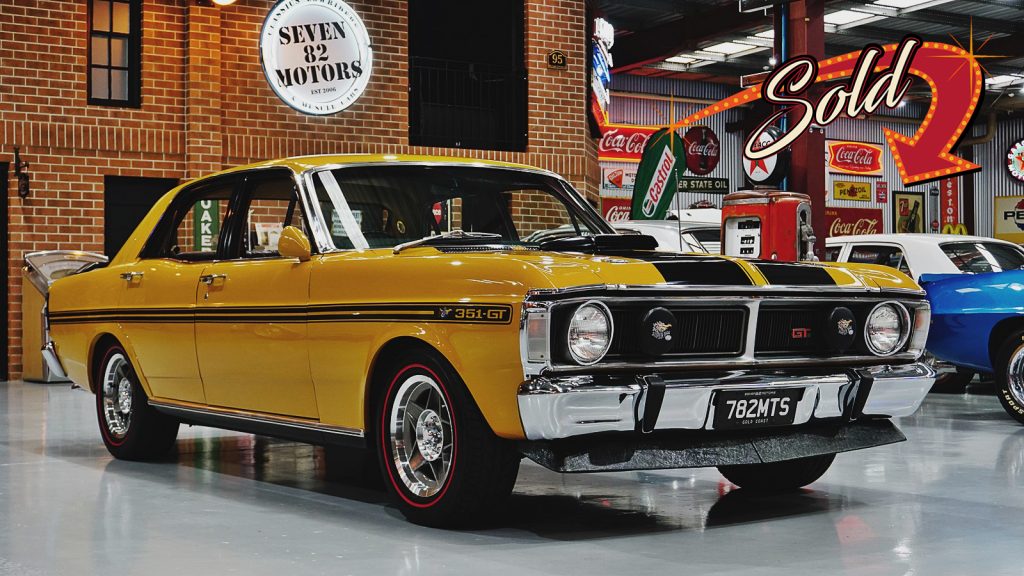 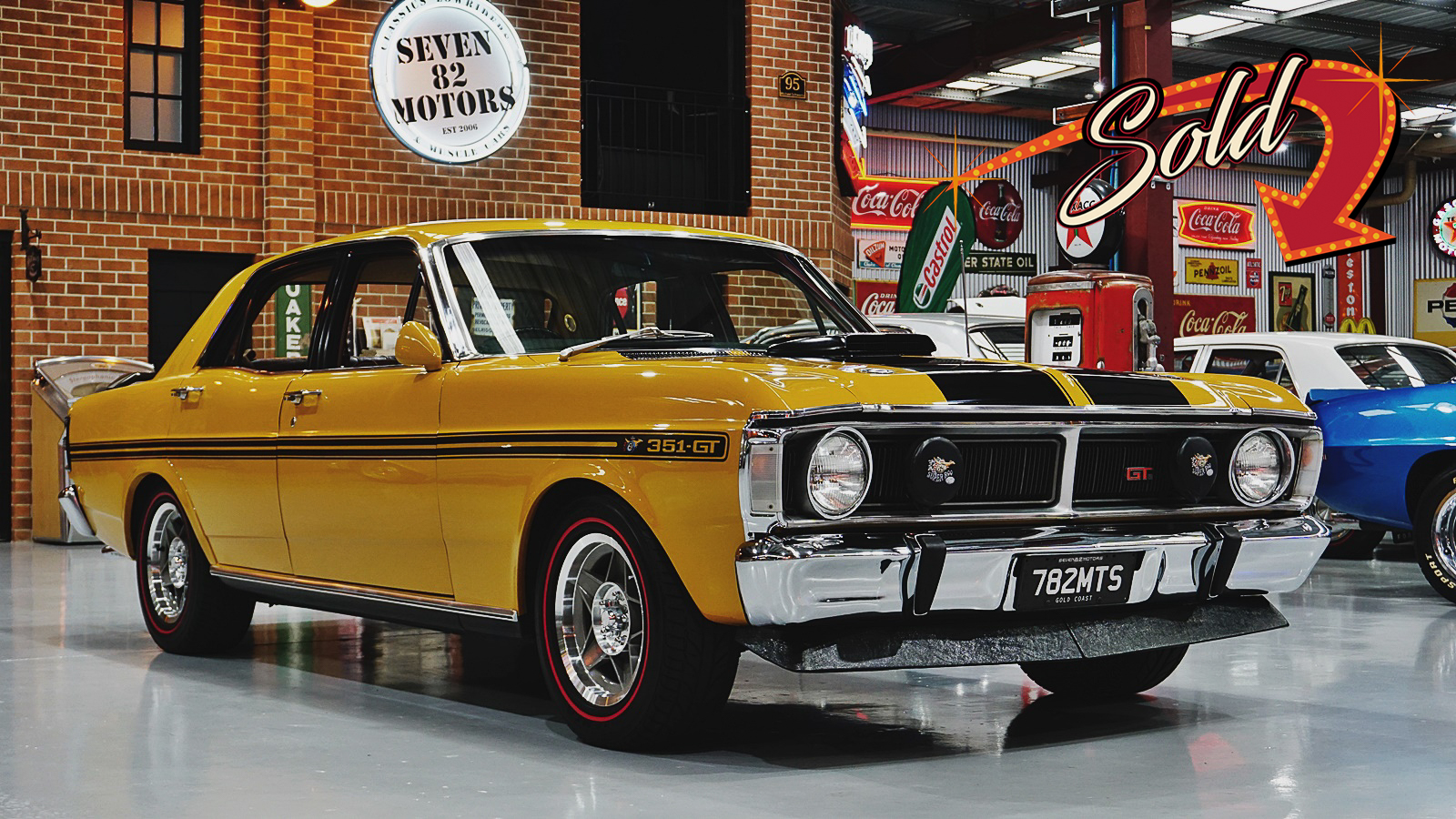 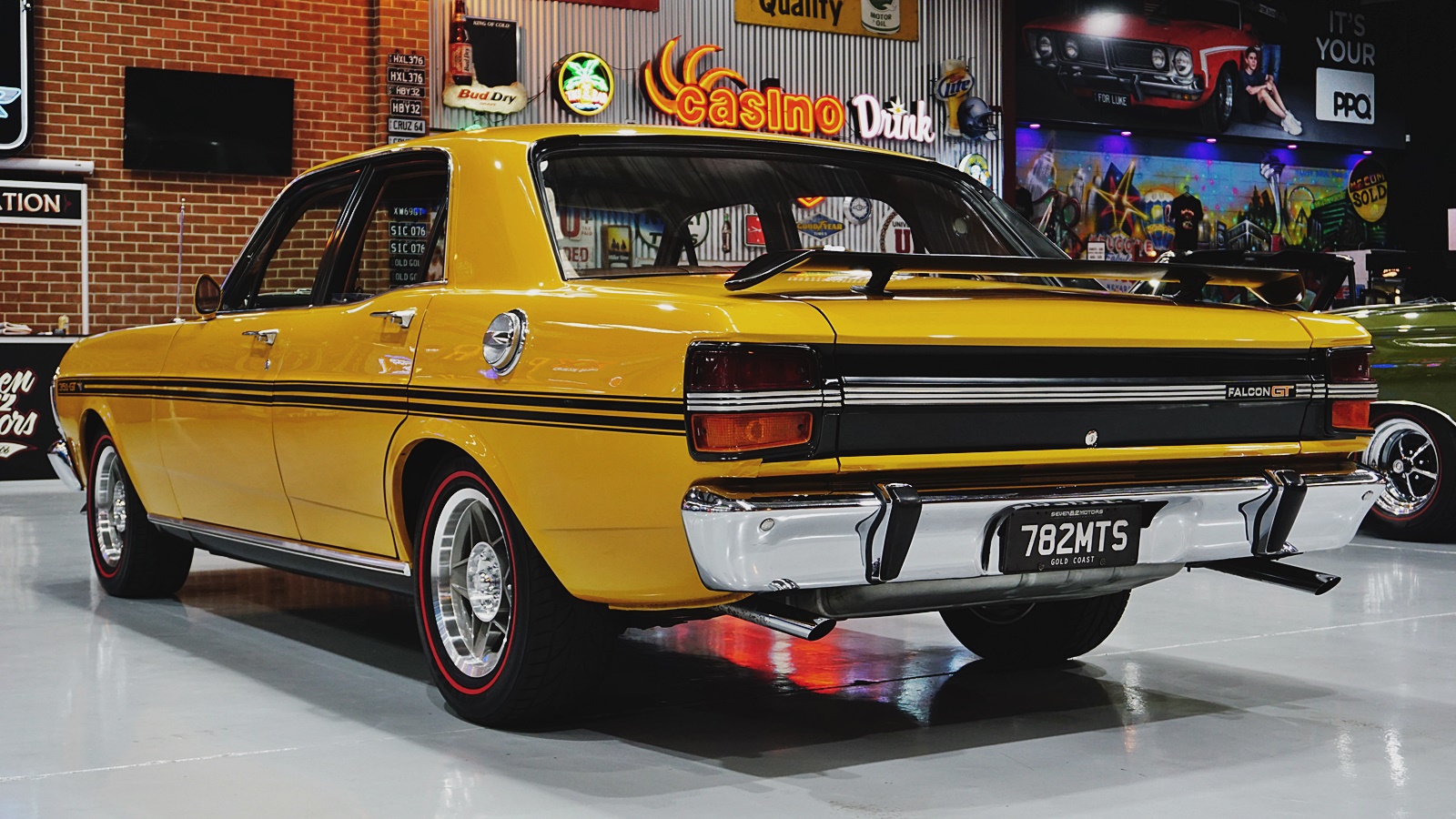 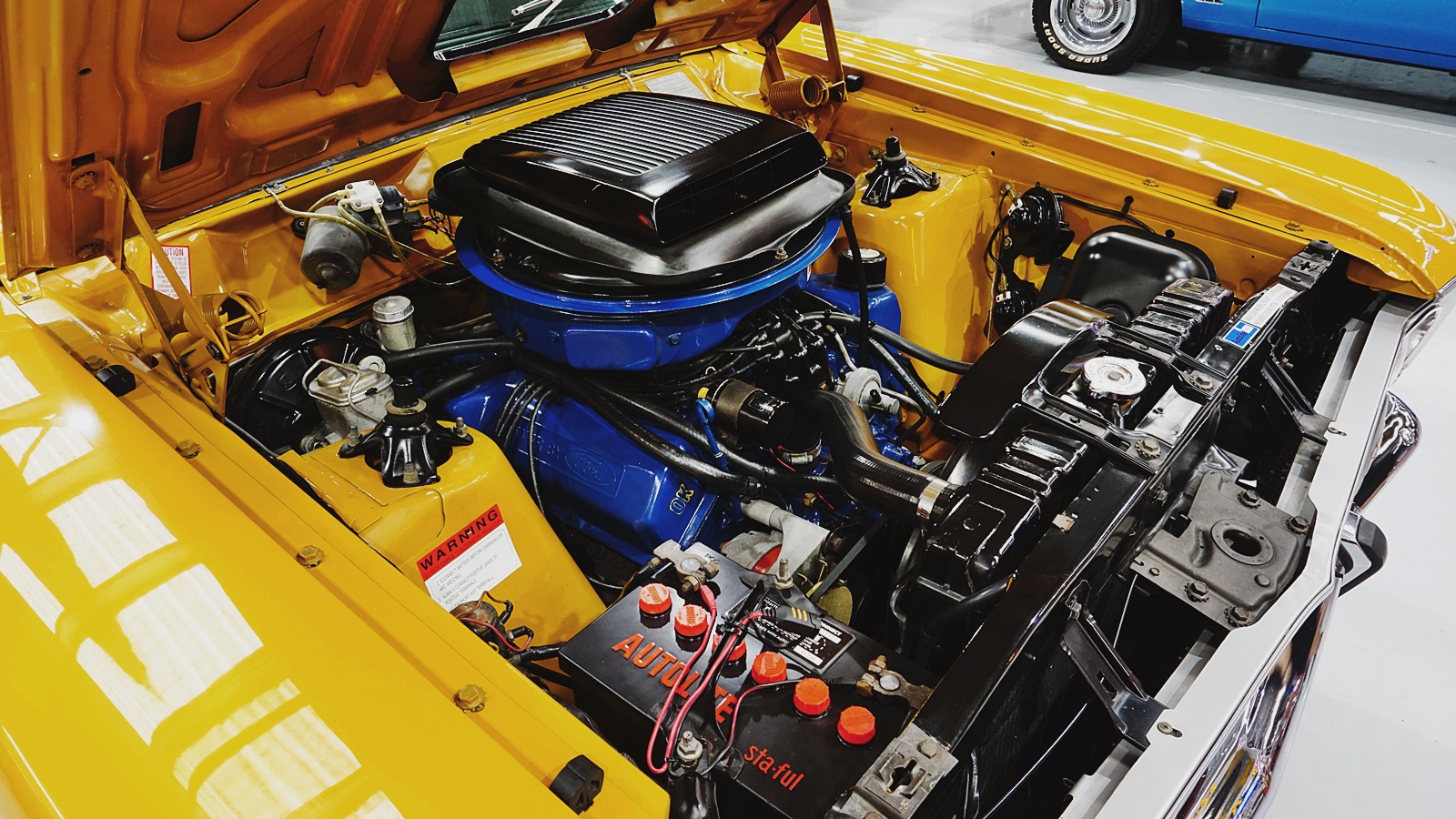 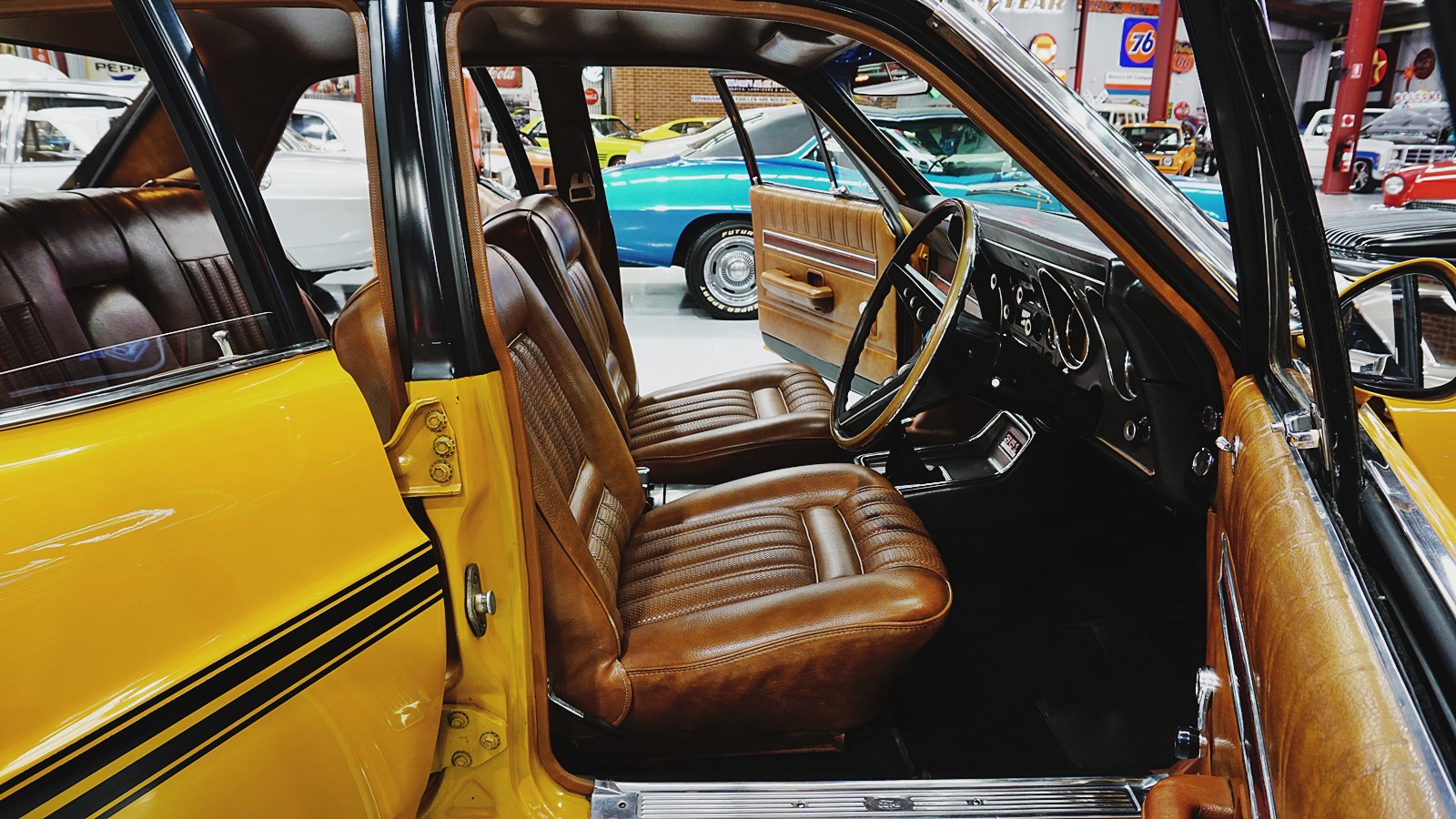 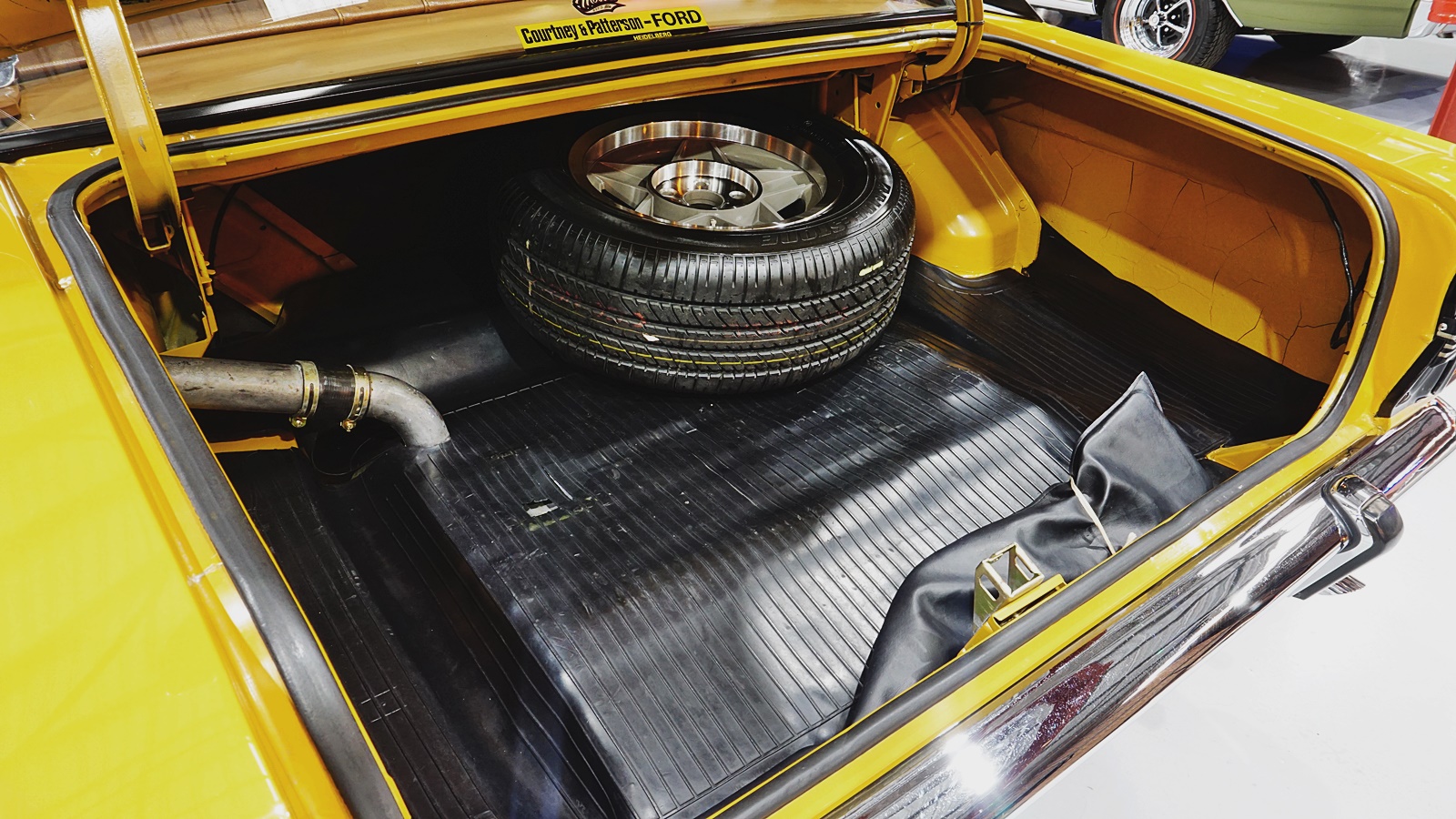 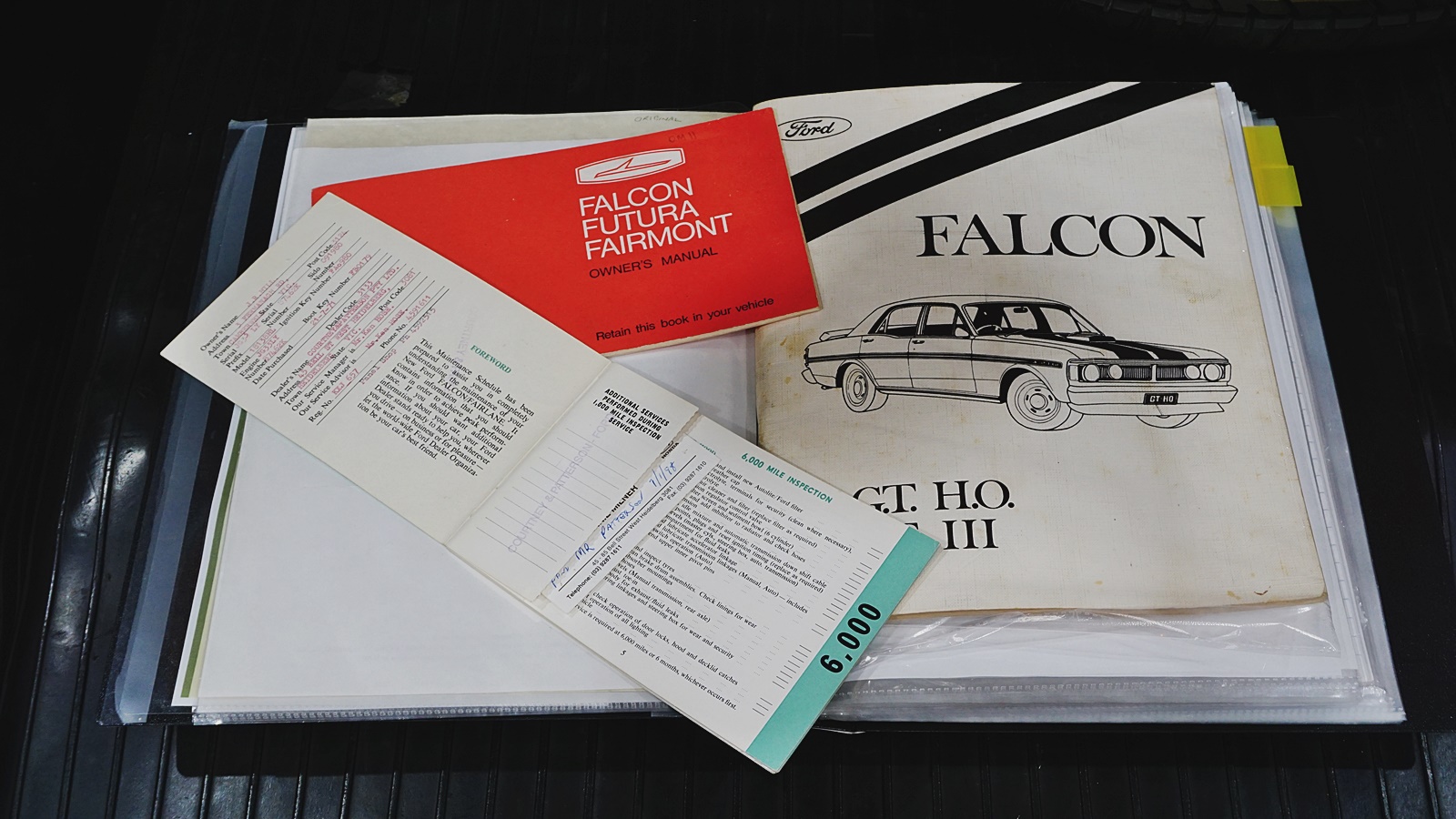 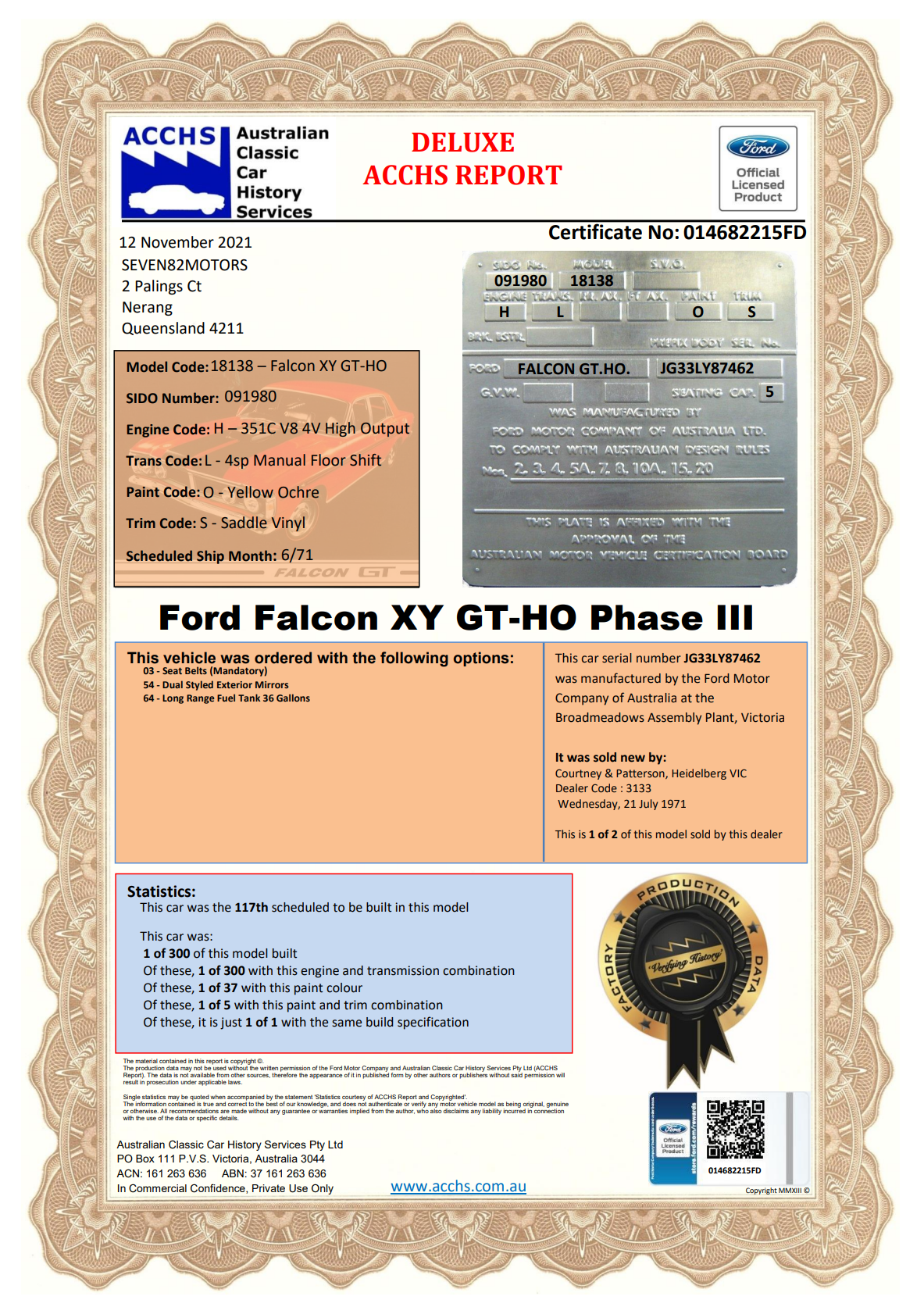 The 1971 Ford Falcon XY GTHO Phase III is the undisputed king of Aussie muscle cars! Created by Ford Australia with one purpose; to win at Bathurst. And that’s exactly what it did in 1971, at the hands of Alan Moffat, forever cementing its place in both motorsport history and the hearts of Aussie car enthusiasts. In order for the car to compete though, a limited run of vehicles had to be sold to the public with a total production of only 300 units. It is believed that a little over 100 of these cars remain today.

The car you see here is an amazing example of a genuine July, 1971 Bathurst Homologation, GT HO Phase III. We believe that this particular example combines the best of both; the looks of a restored car but with the genuine authenticity provided from one that is unrestored. If judged at a show, the car would fall into the “maintained” category where mostly original cars are allowed to have been repainted externally and maintained without being classed as “restored”. An ACCHS report is with the car which confirms the car, in its factory “O” code Yellow Ochre with “S” code Saddle trim was one of five in this colour combination and one of one in this build specification.

This Phase III was sold new by Courtney and Patterson Ford in Heidelberg, Victoria on the 21st of July, 1971. The car was first registered in Victoria with the registration KXJ-657. Since then, the car has a known history of owners which is all documented in the history file that comes with the car. The car remained in Victoria with various owners, until March 1979 when it was sold to a South Australian buyer. During it’s time in SA, the car wore RHO-003 number plates up until early 2004 when it returned to Victoria and back to its KXJ-657 original registration combination. The current owner purchased the car in Victoria in 2011 and brought the car up to QLD where it has remained since. The car shows 82,500 miles on the odometer which is believed to be genuine based on the history file. Through tracing the car’s history there are records of some correspondence between the owner at the time and Peter Jeffery. Jeffery was Alan Moffat’s head specialist mechanic and one of the ‘brain’s trust’ at Lot 6 – Ford’s development warehouse where the Phase III’s were developed. Jeffery confirmed that he knew this Phase III specifically as the car used to be owned by a friend of his. He assisted with tracing the history of the car right back to the second and third owners. He also said that the car had a blueprinted block from Ford, which is something that is also mentioned by a letter from the second to the seventh owner who owned the car from early 1972. The second owner was also the one who purchased the genuine Globe wheels which he states were “offered to him for $250 in 1972 as part of an incentive to homologate the wheels for racing use at Sandown that year”. Along with the history file is the original stamped service manual, owners’ manual and shop manual.

The car as it presents today is an amazing example. Externally the car has been repainted in its original colour of Yellow Ochre and the paintwork quality is very high. The original paint remains in most of the door apertures as well as the underside of the boot. All glass except for the windscreen are original date coded items. Inside, the factory Saddle trim is almost completely original and in incredible condition with no splits or tears. The dash pad looks as good as the day it rolled off the factory floor without a single split or crack. The engine bay is as neatly presented as outside with the rebuilt, matching numbers, 351ci V8 parked in the middle of the engine bay. The underside of the car is as honest as the day is long. You can see the car has been well kept indoors away from the elements and has never suffered from rust issues that many of them have.

The car will be sold with a full verification report from ICAARS completed in November 2021, which confirmed the authenticity of the vehicle through a detailed inspection and report. These cars are only original once, and we believe the “maintained” state of this Phase III provides the absolute best compromise with the cosmetics of a fully restored car but the genuine authenticity that can only be provided by originality. This car is an iconic piece of Australian motoring history and a true-blue chip style investment grade muscle car. 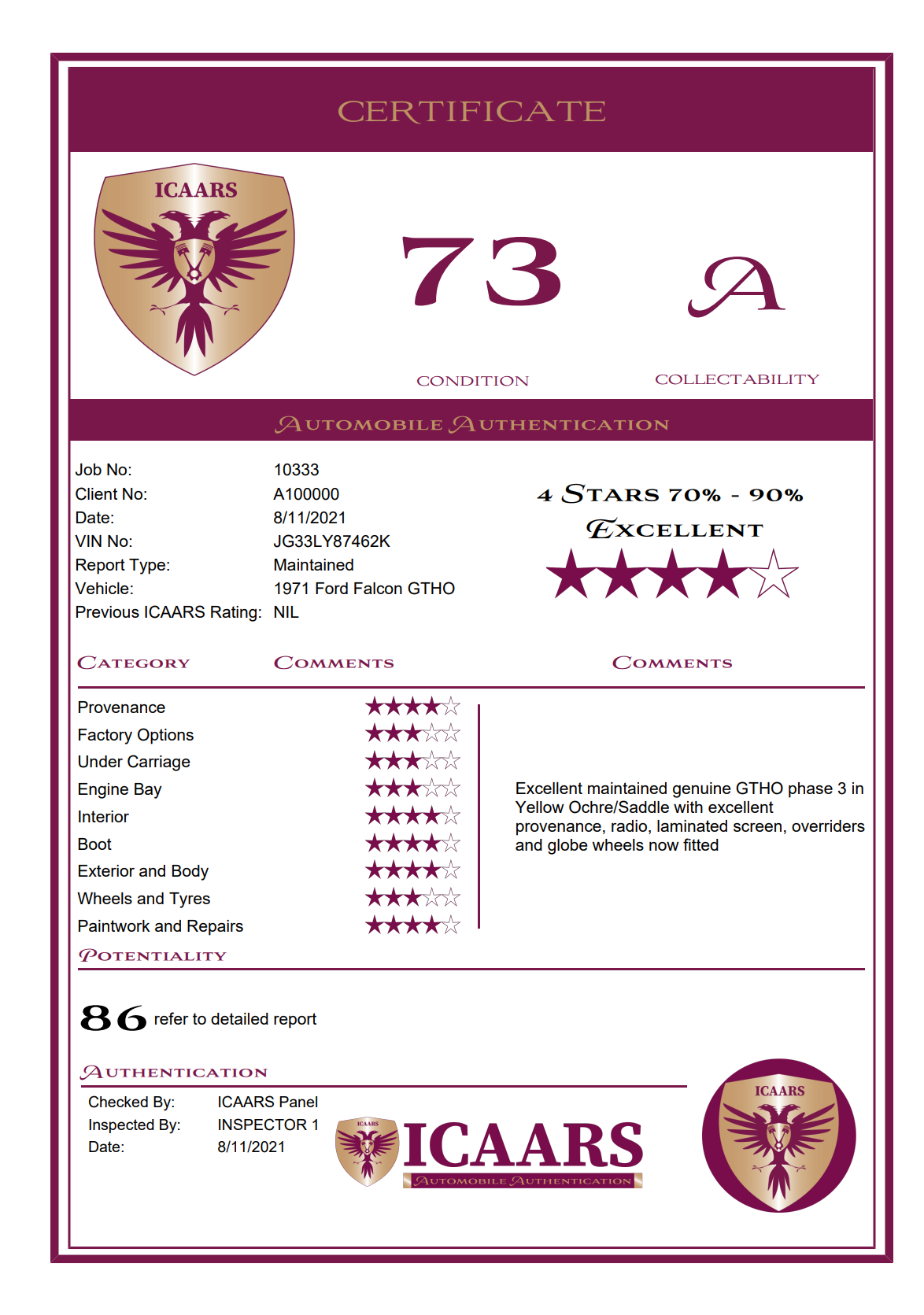 Due to the special nature and value of this vehicle, we ask that anyone intending to bid on this car please contact us and make themselves known prior to doing so. We will need to see a copy of government issued photo identification (Drivers Licence or passport) for registered bidders on this lot. Please contact Locky on 0403 935 488 or email [email protected] for more information and a confidential discussion about the vehicle or to arrange a private inspection.