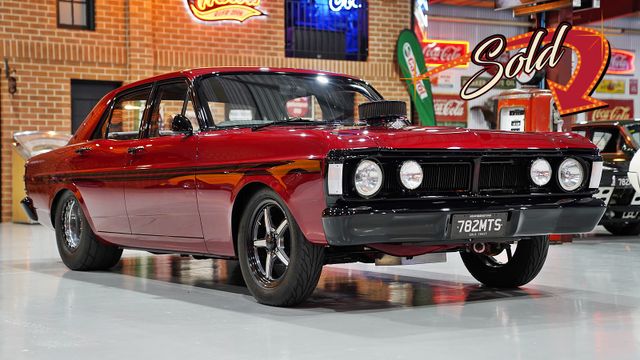 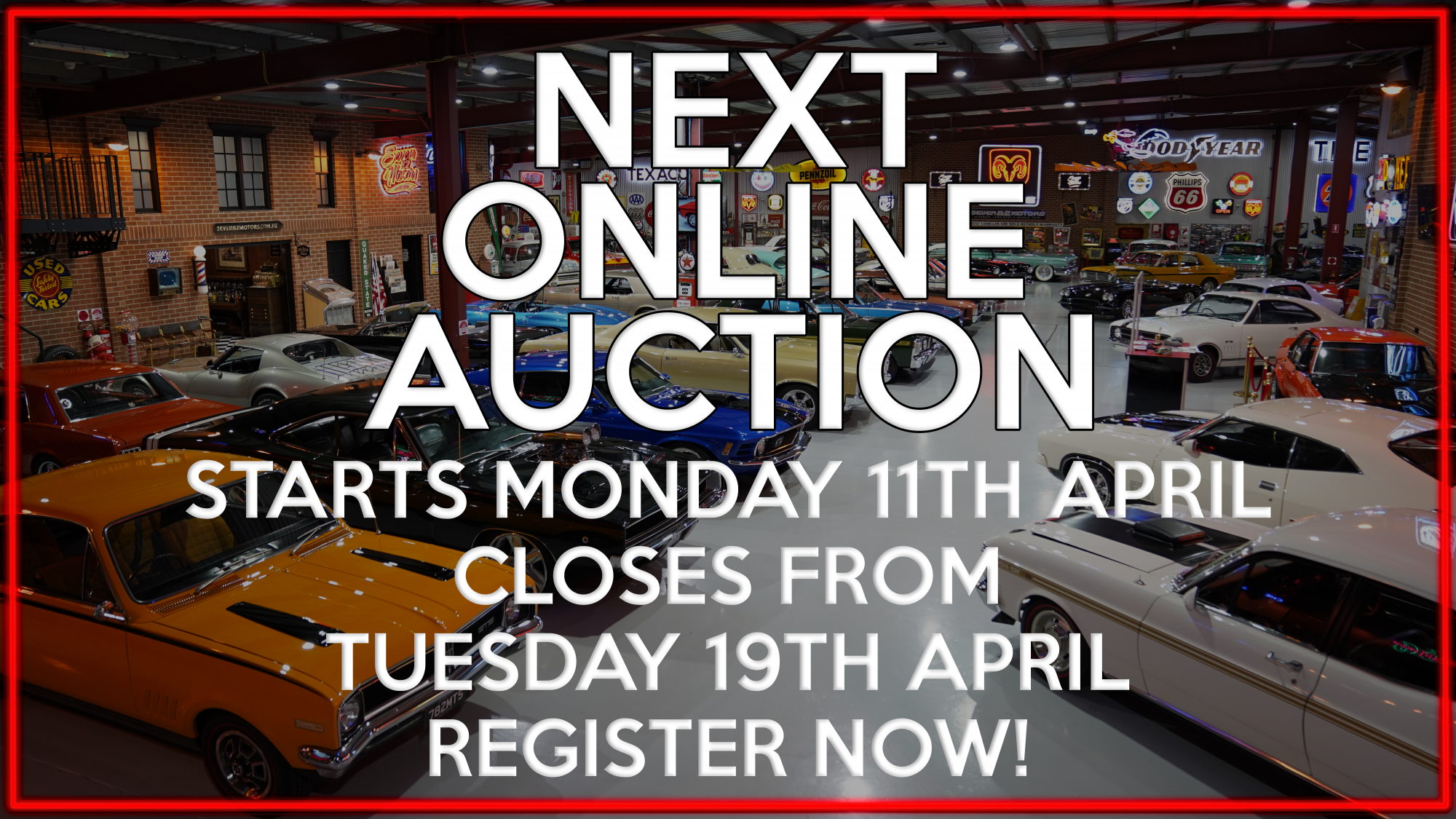 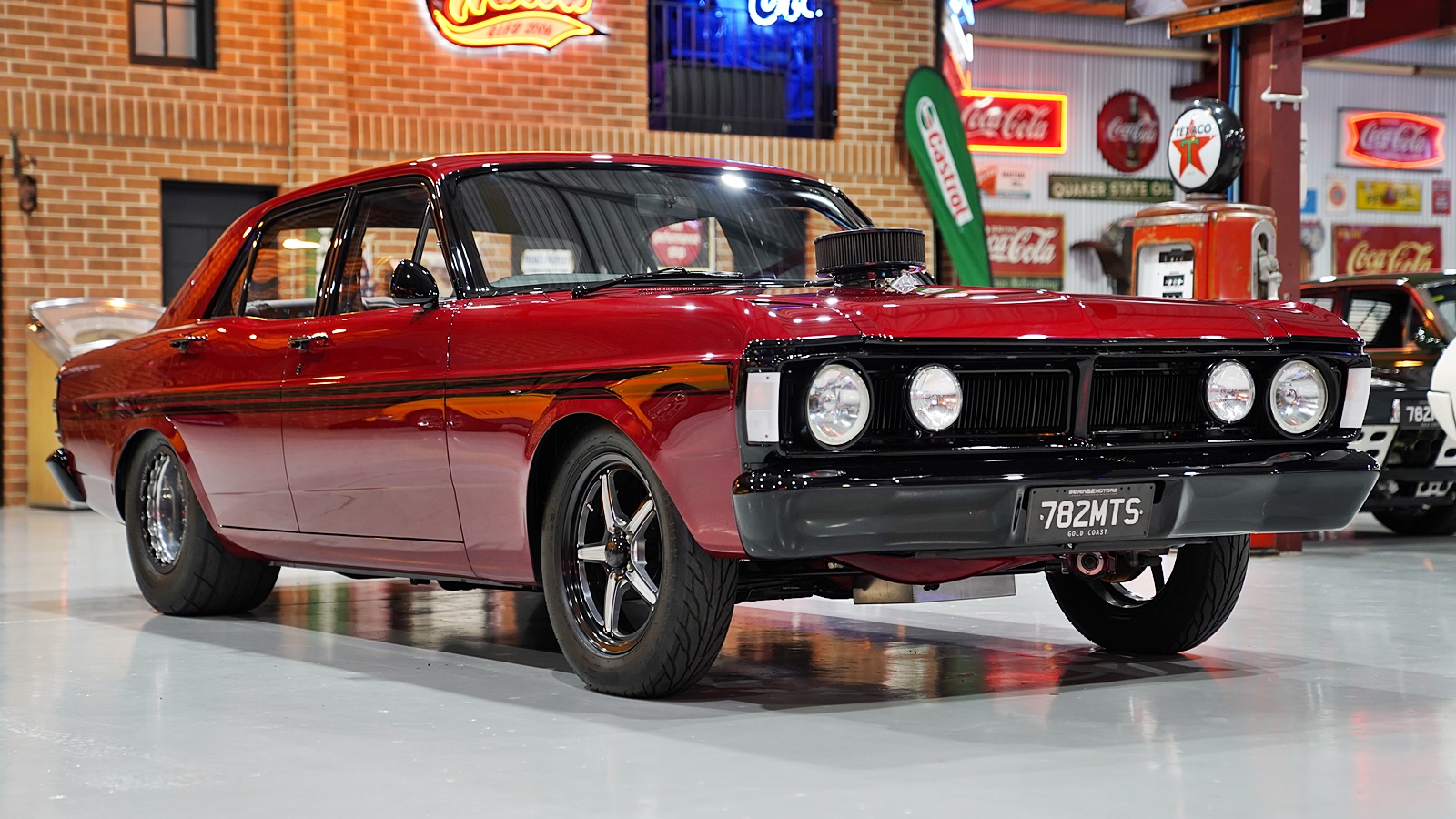 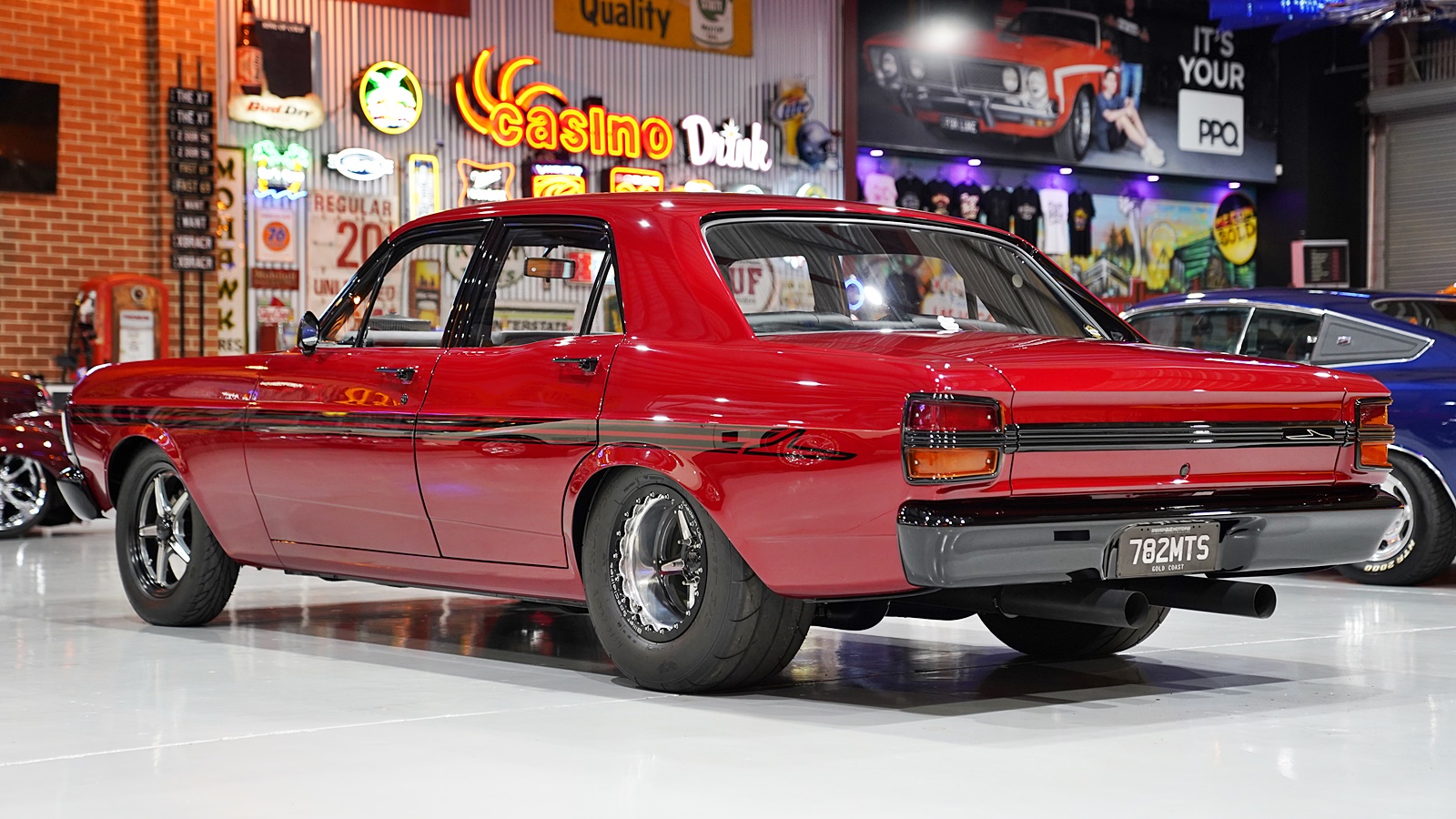 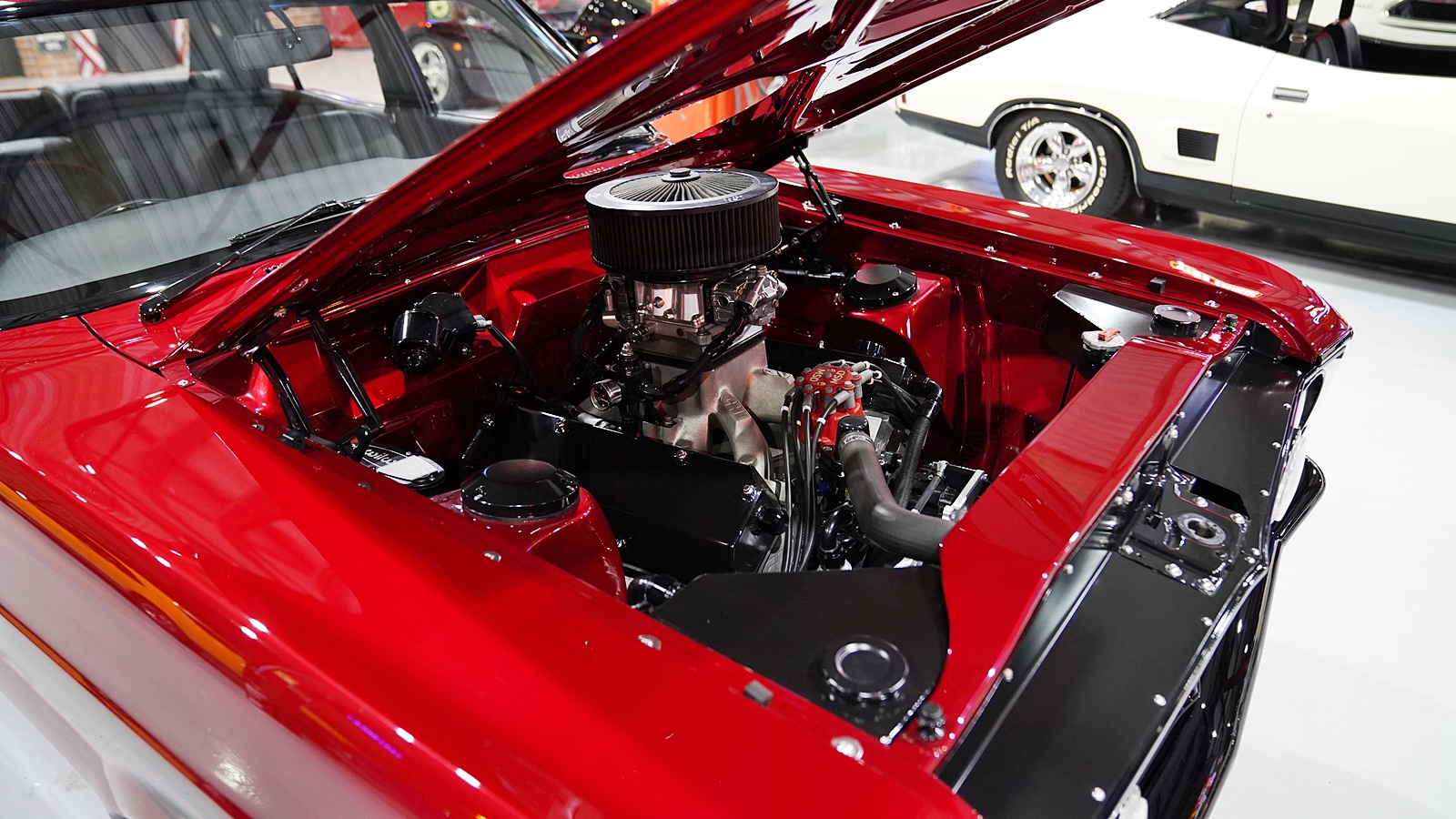 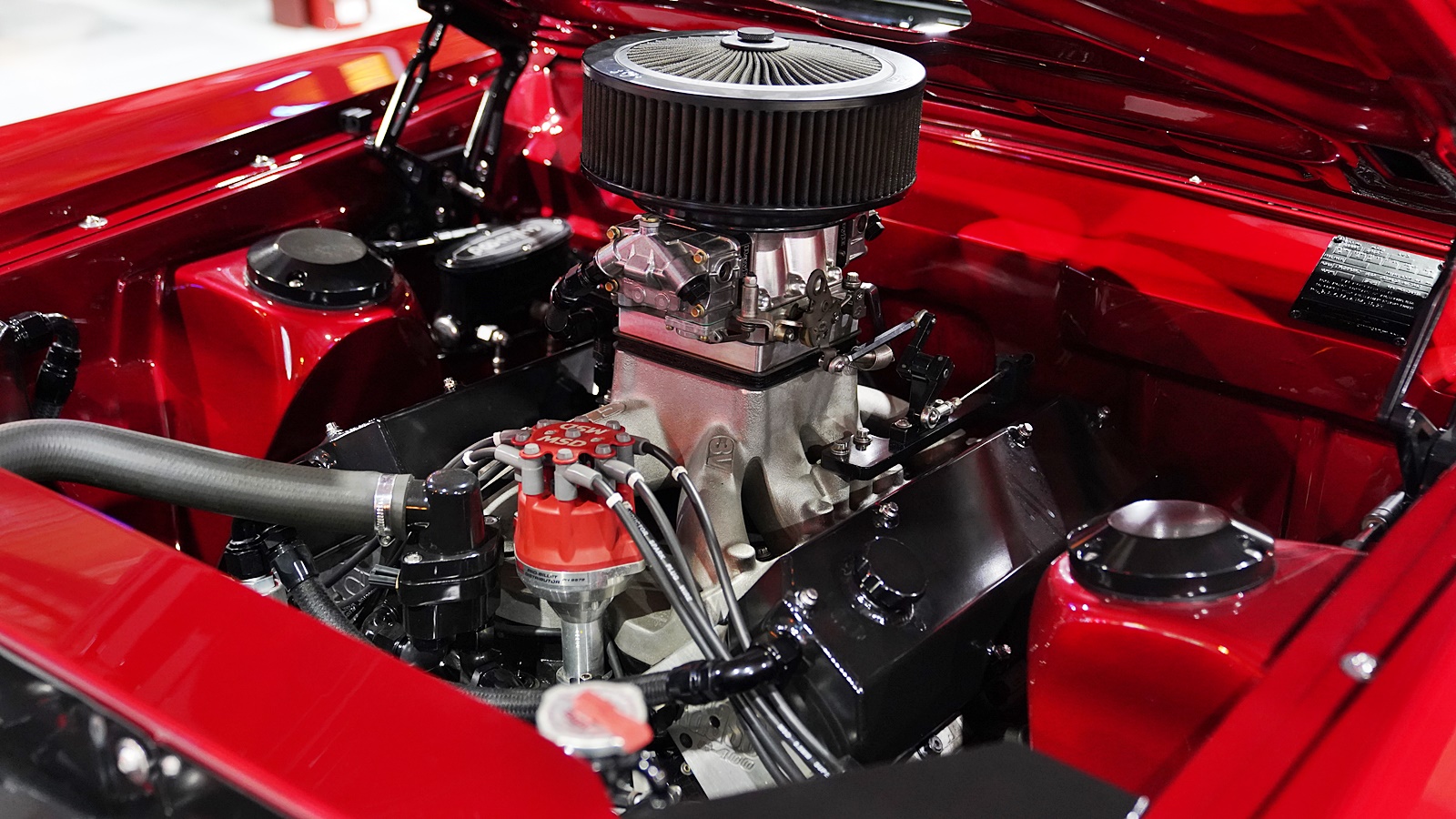 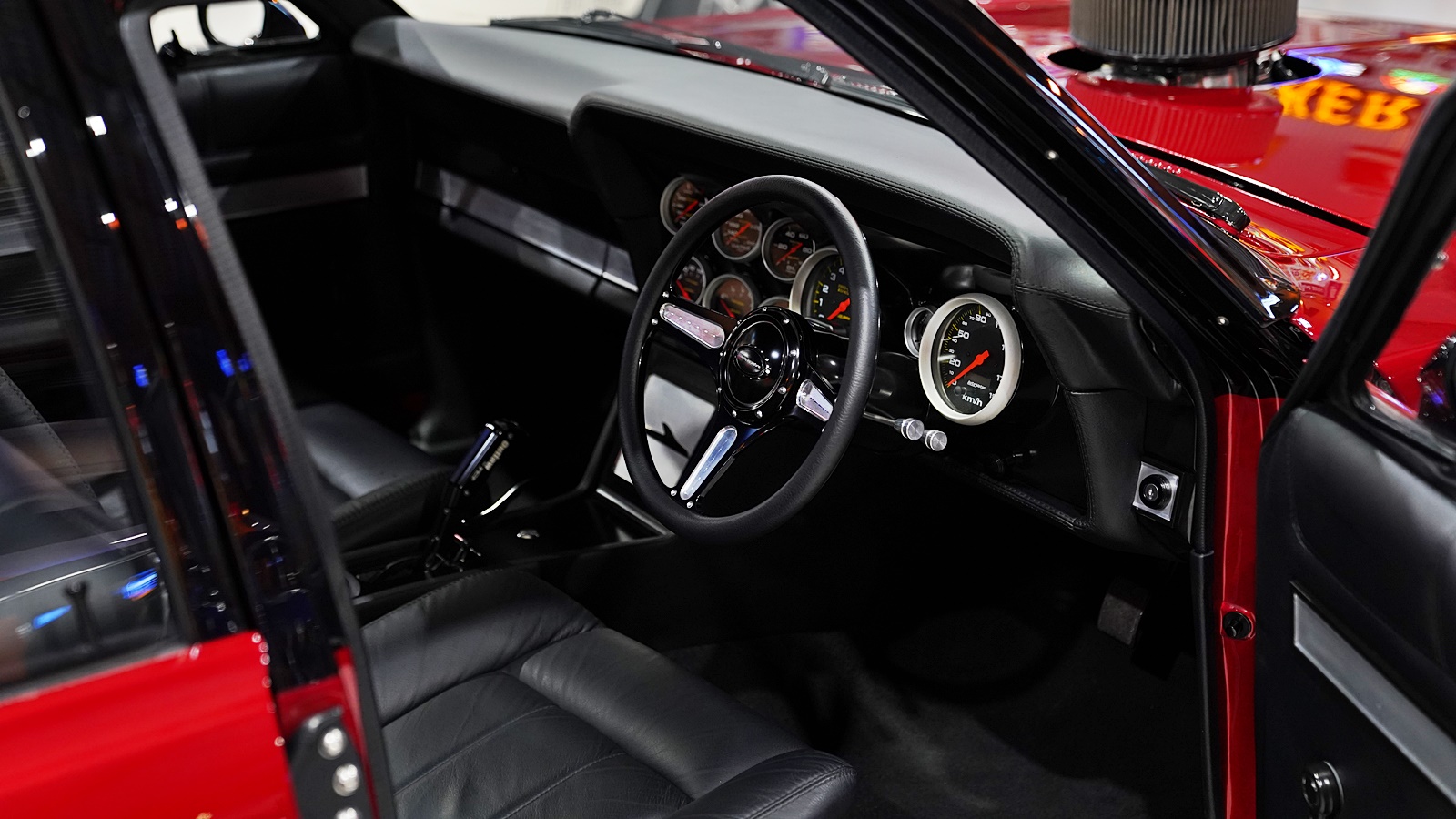 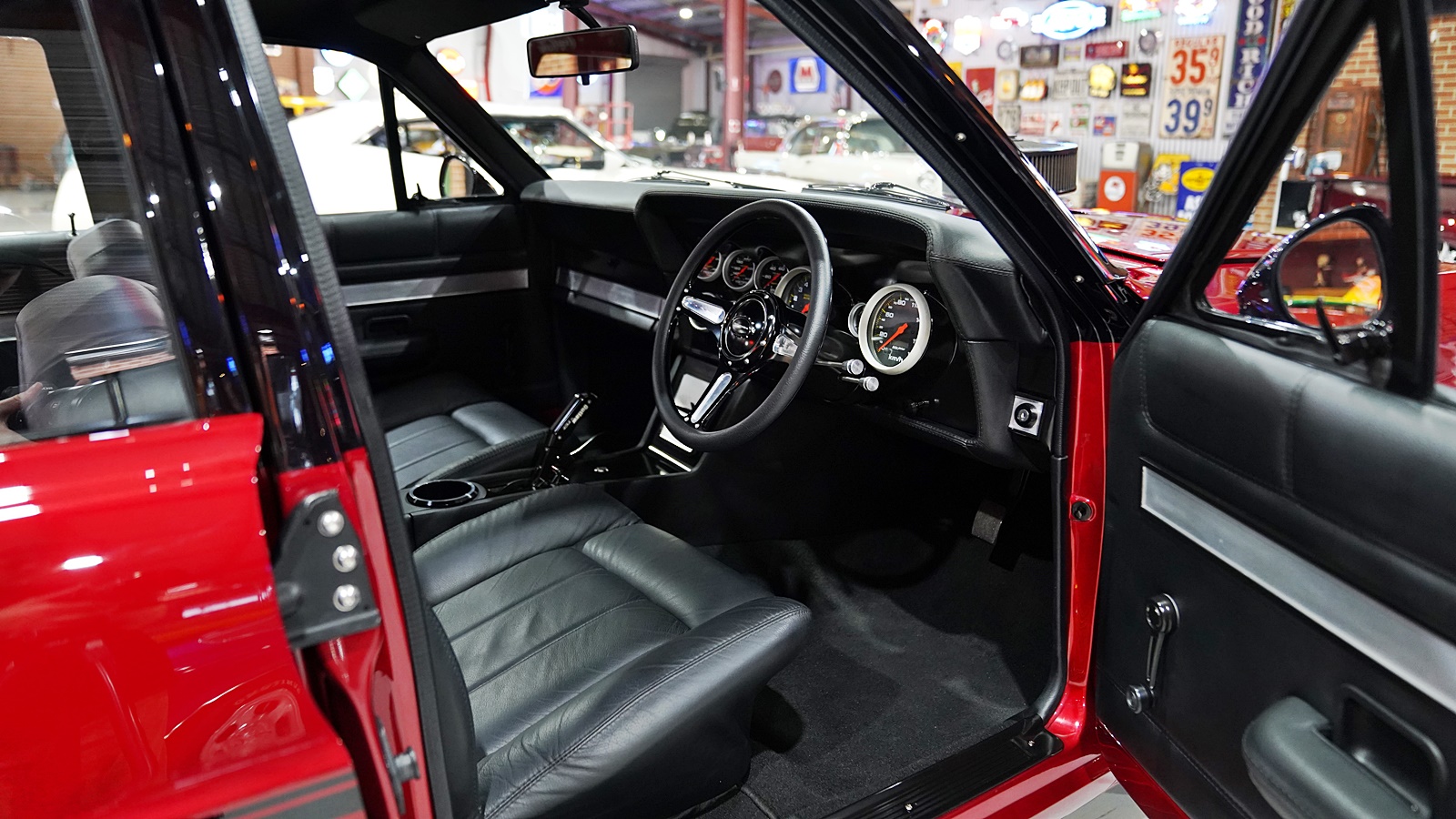 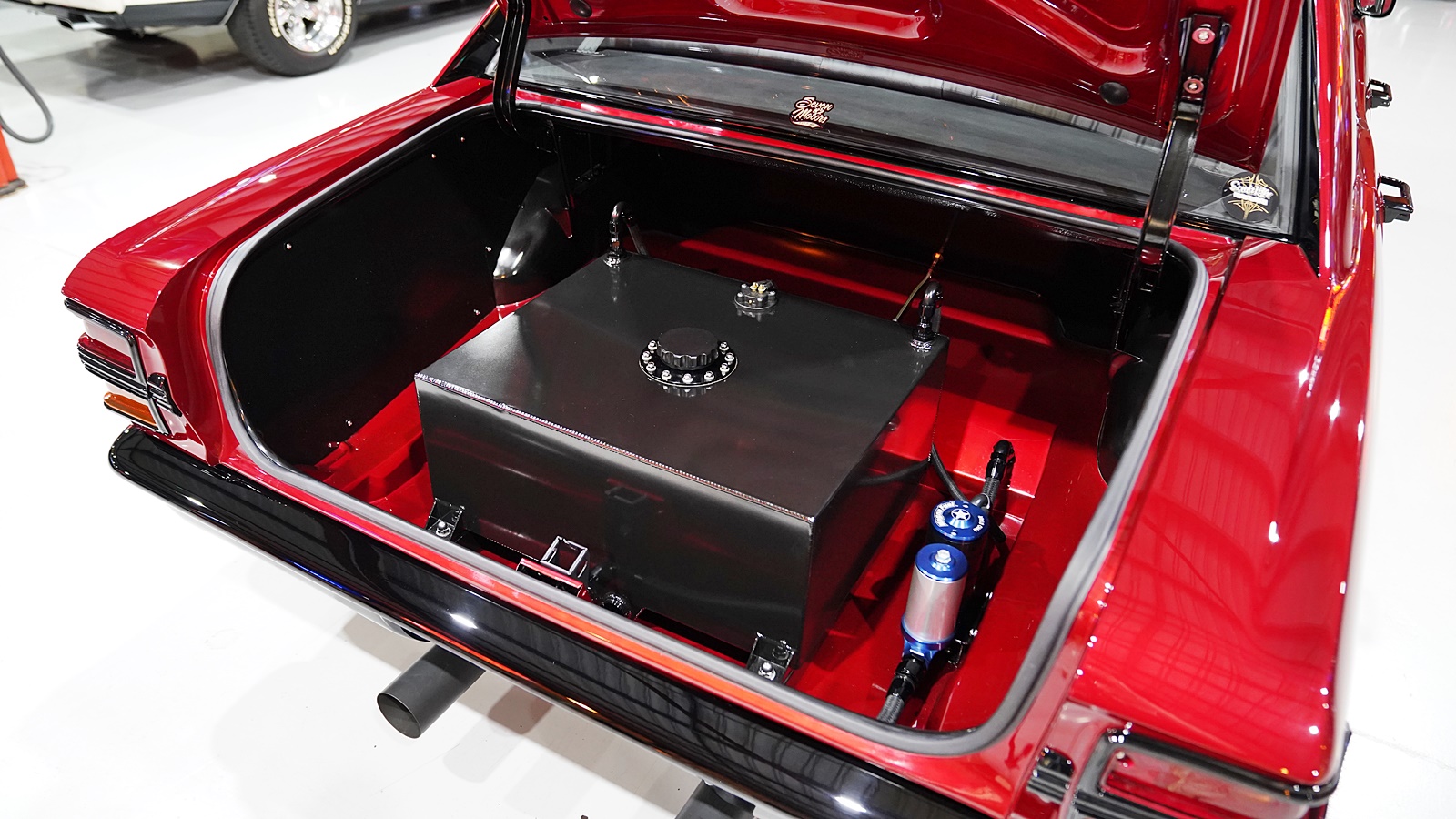 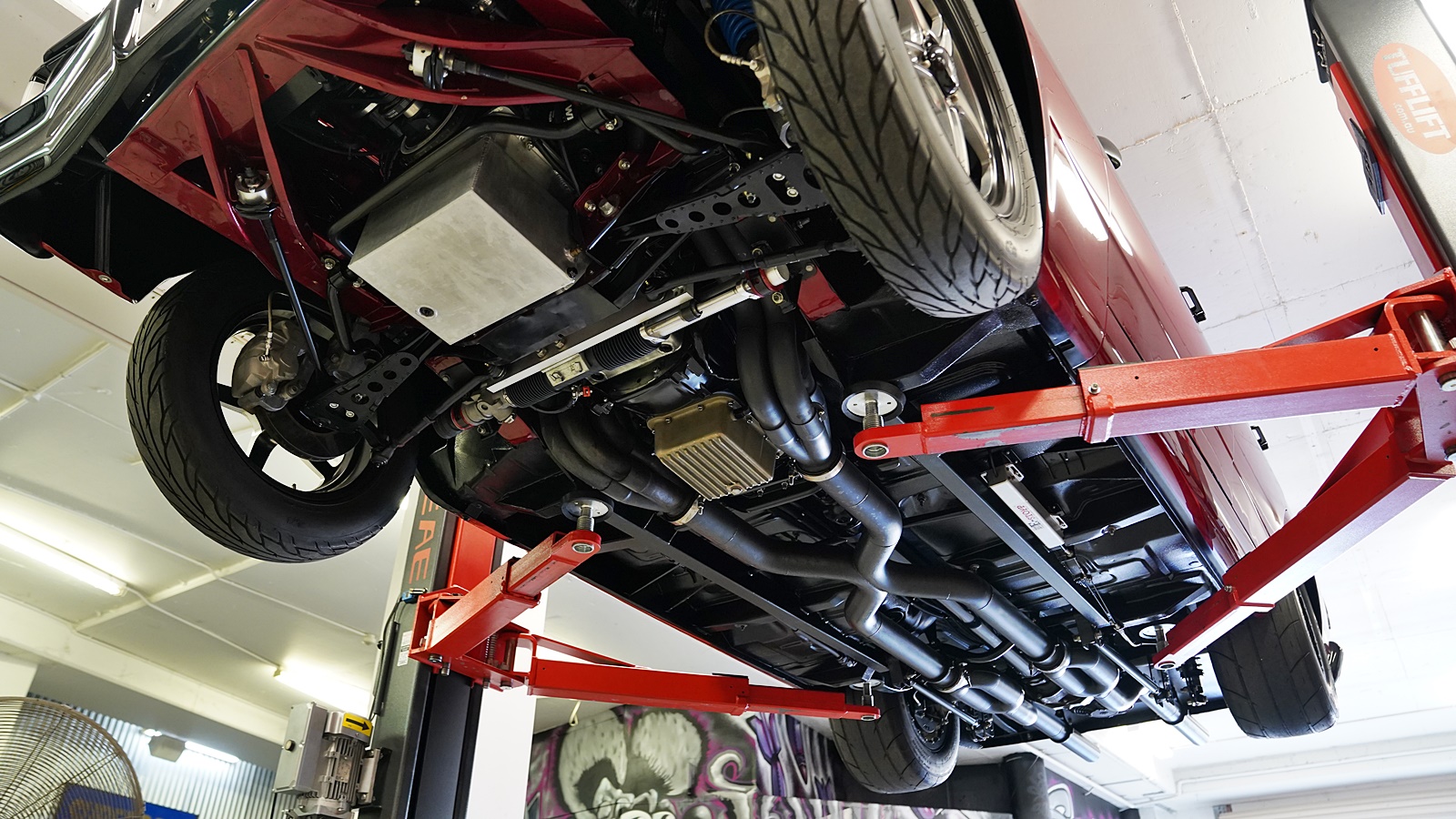 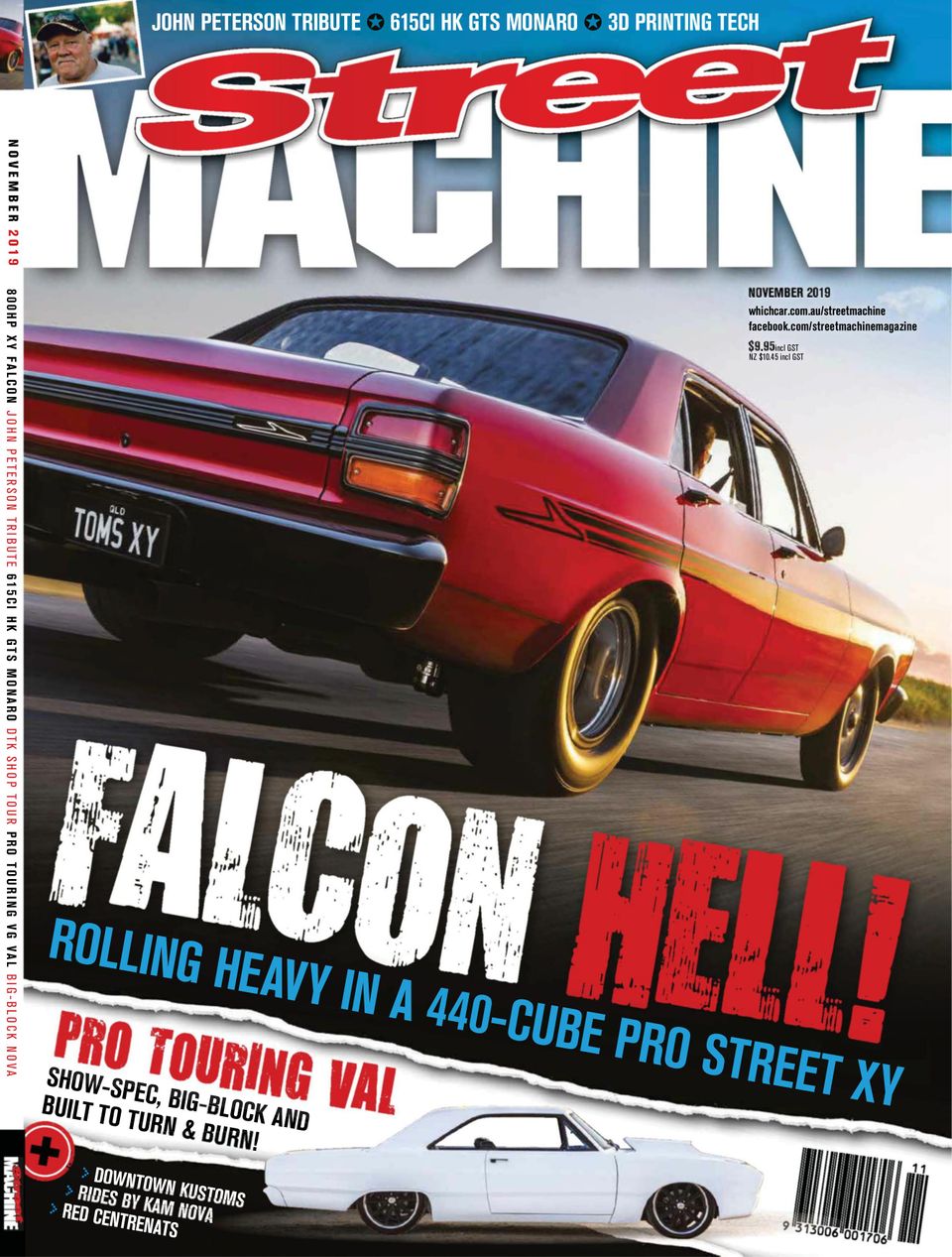 This 1971 Ford XY Falcon has been through a full ground up, nut and bolt built into a one-off, pro street style custom. The story started in 2013 when the current owner purchased the car as a rolling shell. The car was worse than expected when it arrived, so the decision was made to send the car to Ol’ School Garage for the boys to give it a new life. The outside of the car looks relatively factory at first glance but there is a huge amount of subtle custom work in the body. Some of the things you might notice is the deleted fuel filler and rain gutters, reprofiled wheel arches, deleted rear window moulds and reshaped front window moulds. The bumpers have been tucked up close to the body front and rear and there is more custom fabrication in the boot and engine bay. Once the body was gapped and straight, the car was coated in Lexus ‘Infrared’ paintwork with custom black stripes. The bright work on the outside has been blacked out to give the car a more modern look. The bonnet features a removable hornet style scoop for a couple of different looks. Finishing the car externally is a set of Billet Specialties Street Elite wheels measuring 17” x 4.5” up front and a meaty 15” x 10” in the rear with Mickey Thompson tyres.

Inside, the car has been treated to a full custom trim in black leather by Image Trimming. The basic layout of the interior is still the factory buckets and bench in the rear but everything has been redone with extra bolsters and covered in black leather. The dash is custom with a full set of Autometer gauges and the centre console has some cup holders and a ratchet shifter.

Under the bonnet you will find a show quality engine bay featuring a 440 ci Clevor V8 engine built by TOCA Performance. The engine which uses a World Products 9.5” deck cast iron block with billet four bolt mains, CHI heads, Custom solid-roller Cam, JE pistons, Callies internals, and is topped by a 1350cfm BLP Racing BX4 Xtreme carb. Spark is provided by an MSD ignition and gassed are expelled through some Triple-step headers into a twin 3.5” custom exhaust. Cooling is handled by a PWR radiator with twin SPAL thermos fans. This would have to be one of the tougher naturally aspirated cars out there making a dyno proven 800hp at the crank. The engine is paired to a fully manualised, reverse pattern, C4 automatic transmission with transbrake and 5,500rpm stall converter. Power is fed to the rear wheels via a 9” diff with strange centre, Truetrac, Altra 9, 35 spline axles. The suspension has also been upgraded to feature RRS Phase 2 front coil over struts and a McDonald Bro’s four link rear end with Viking Coil overs and anti-roll bar. Steering is rack and pinion and the brakes have been upgraded to four-wheel discs with DBA rotors and PBR calipers along with a Wilwood master cylinder.

On completion the car was unveiled in the elite hall at Summernats 32 and has since been featured on the cover of Street Machine magazine in November 2019. The car has too many modifications to capture in full and the build was completed over a number of years at an estimated cost in excess of $400,000. This is a rare opportunity to own an incredible, well built, one-off street machine without having to invest the time to build it and at a fraction of the build cost.