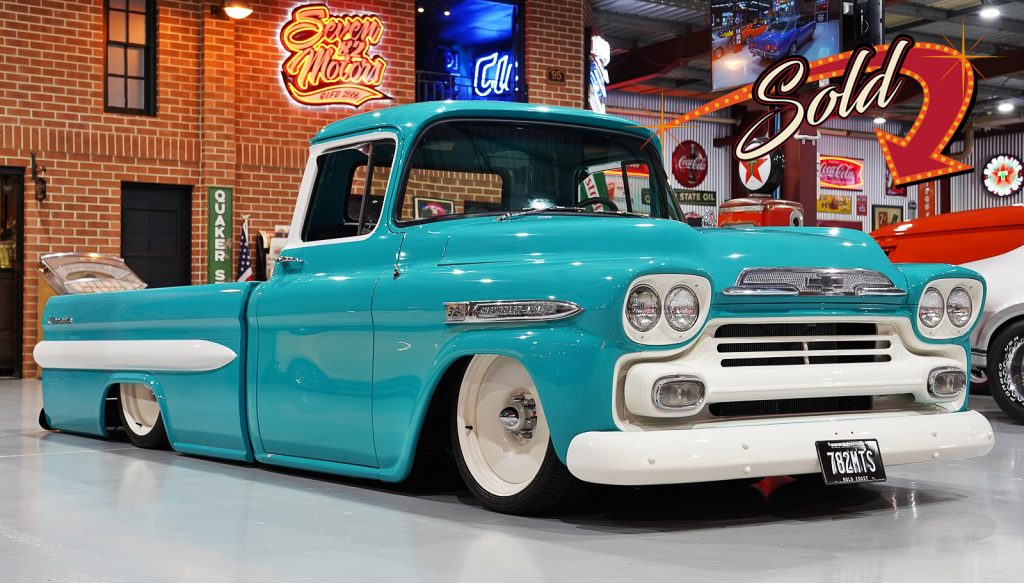 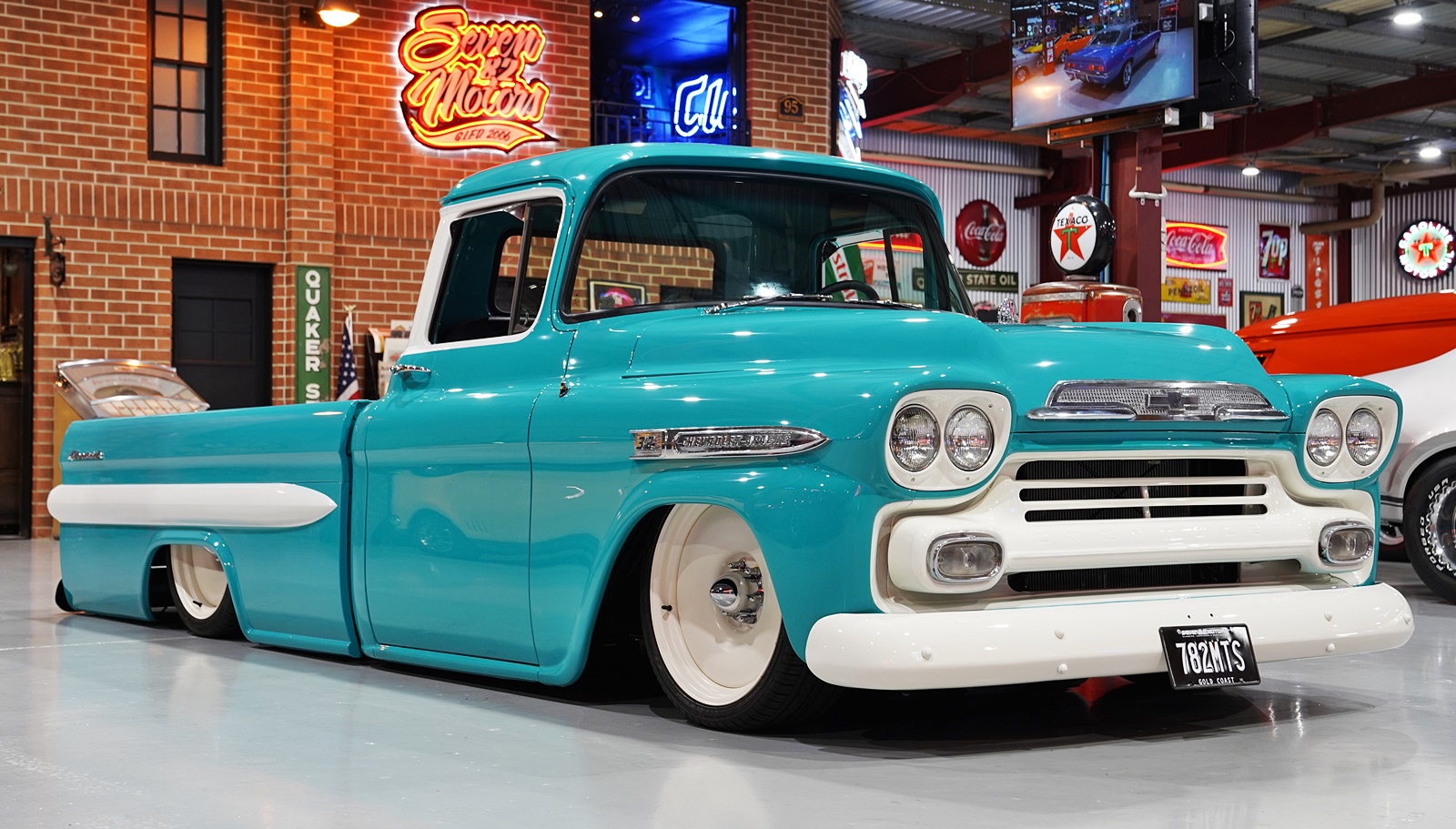 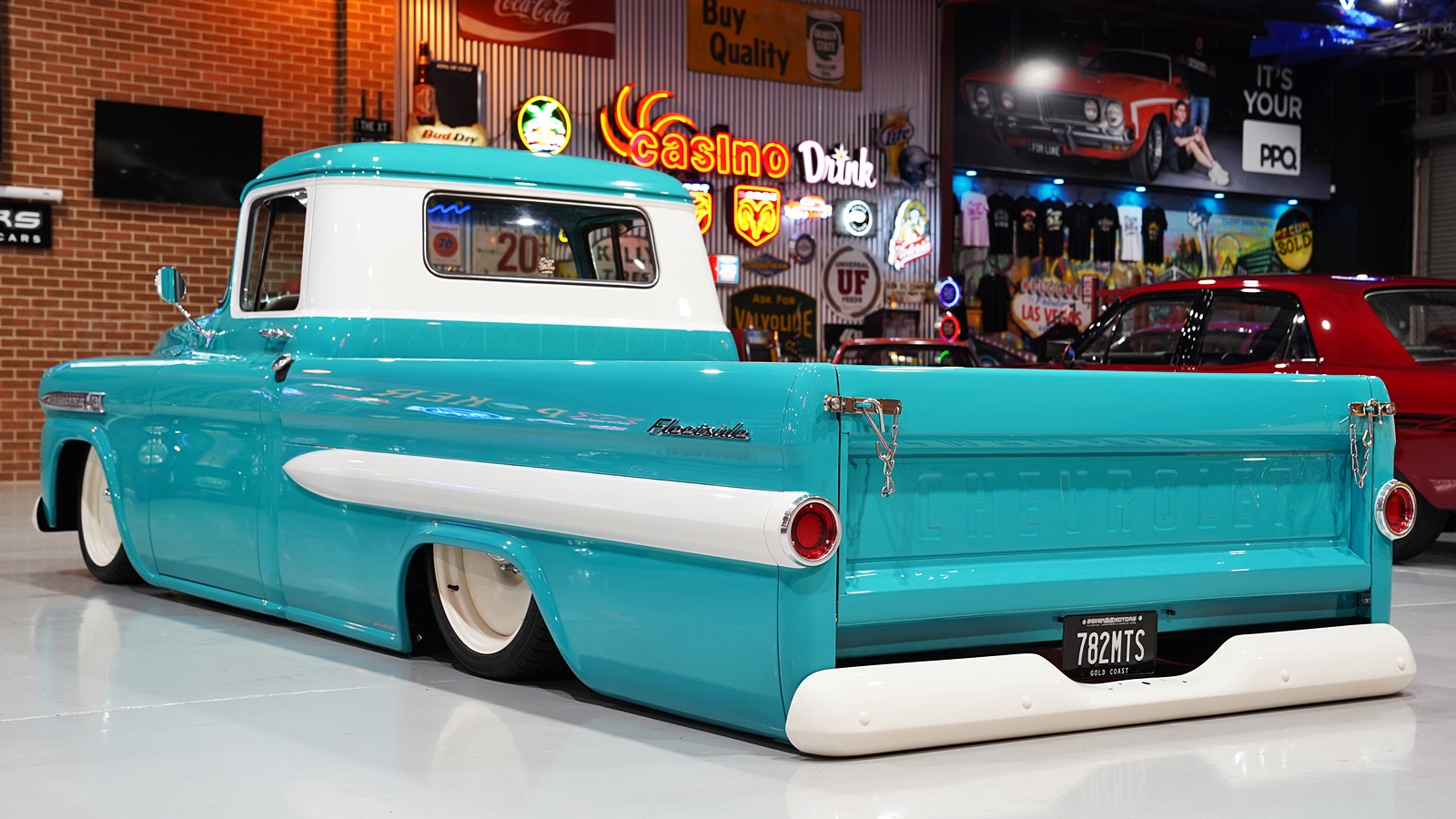 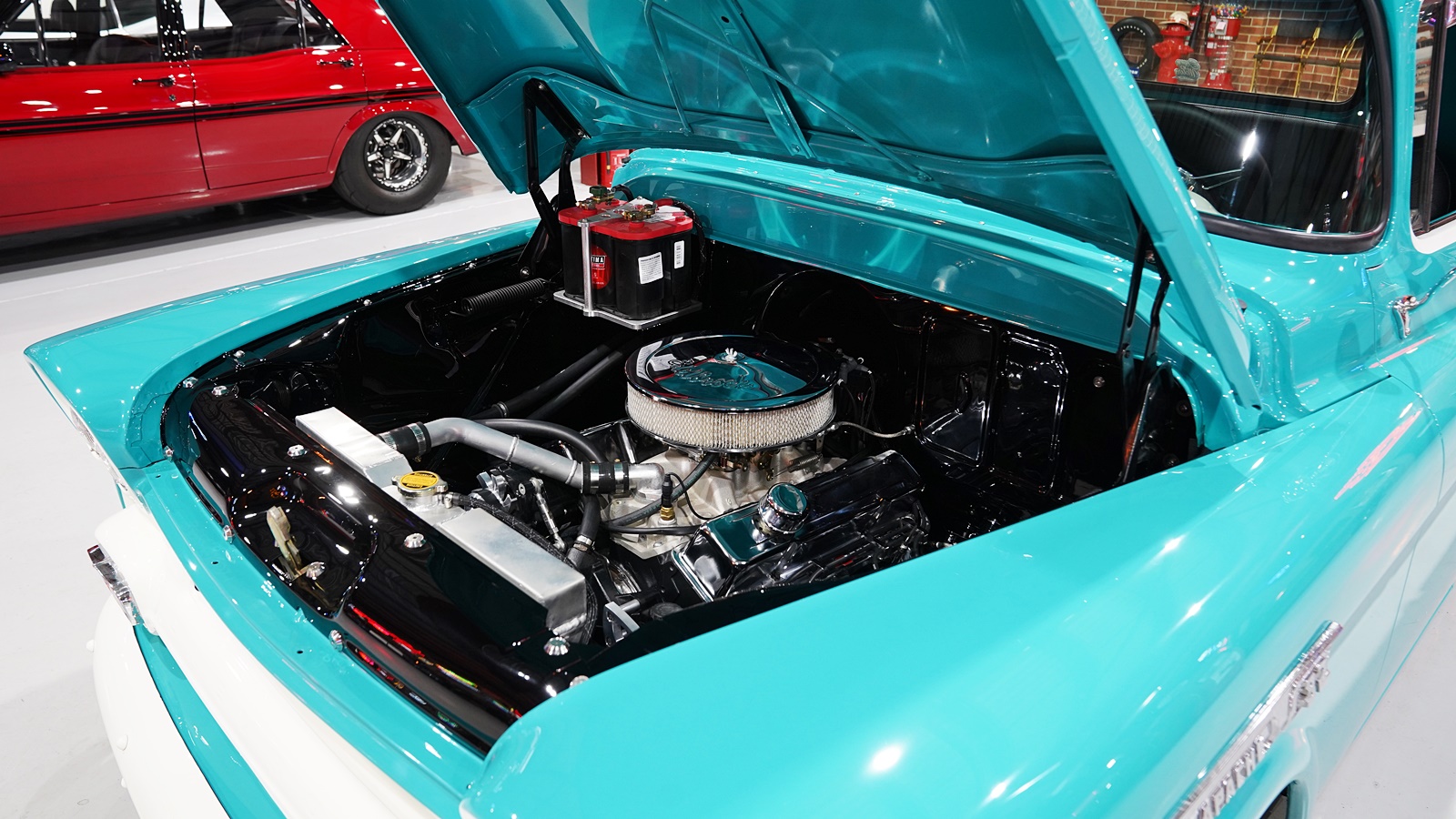 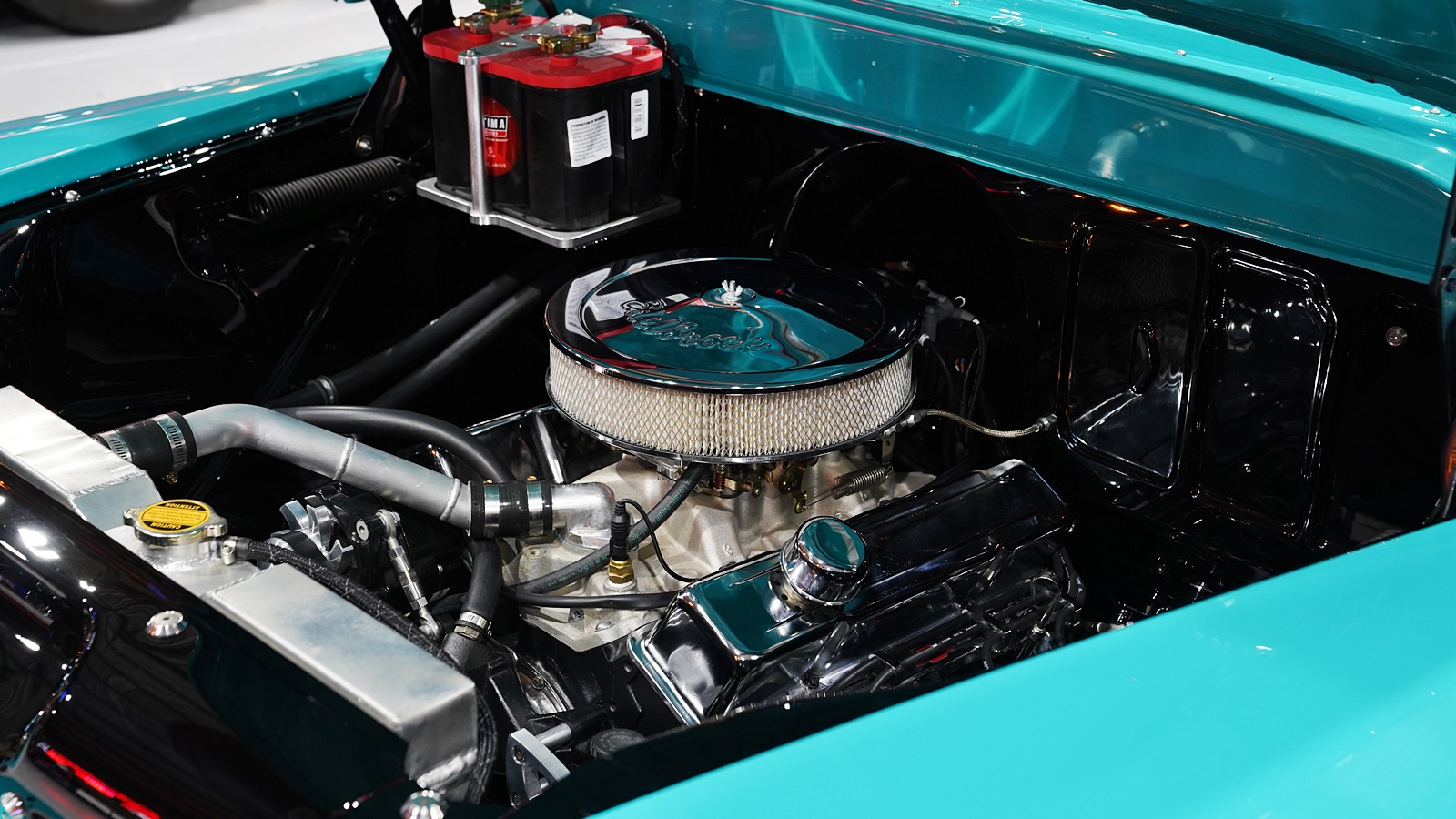 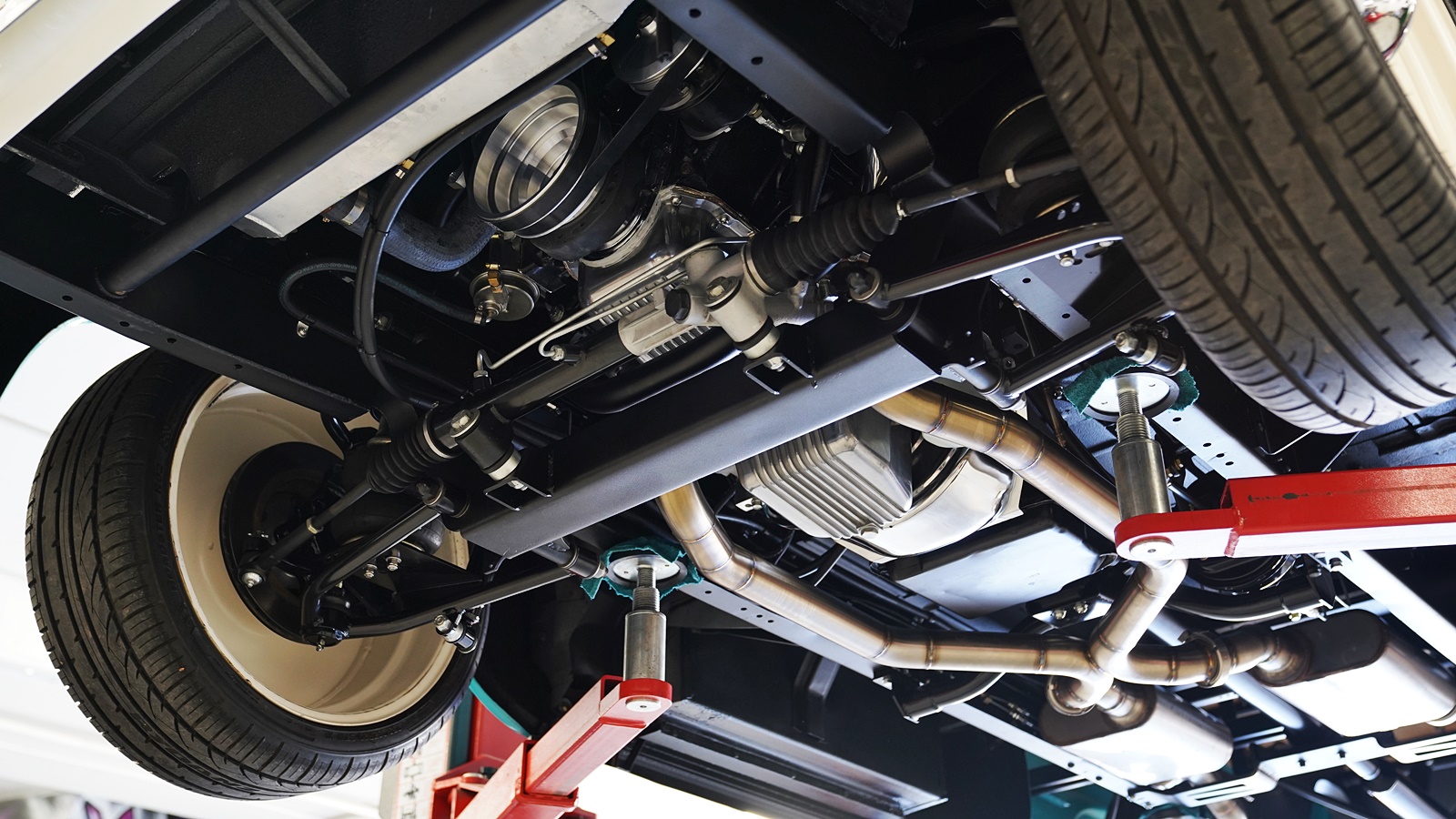 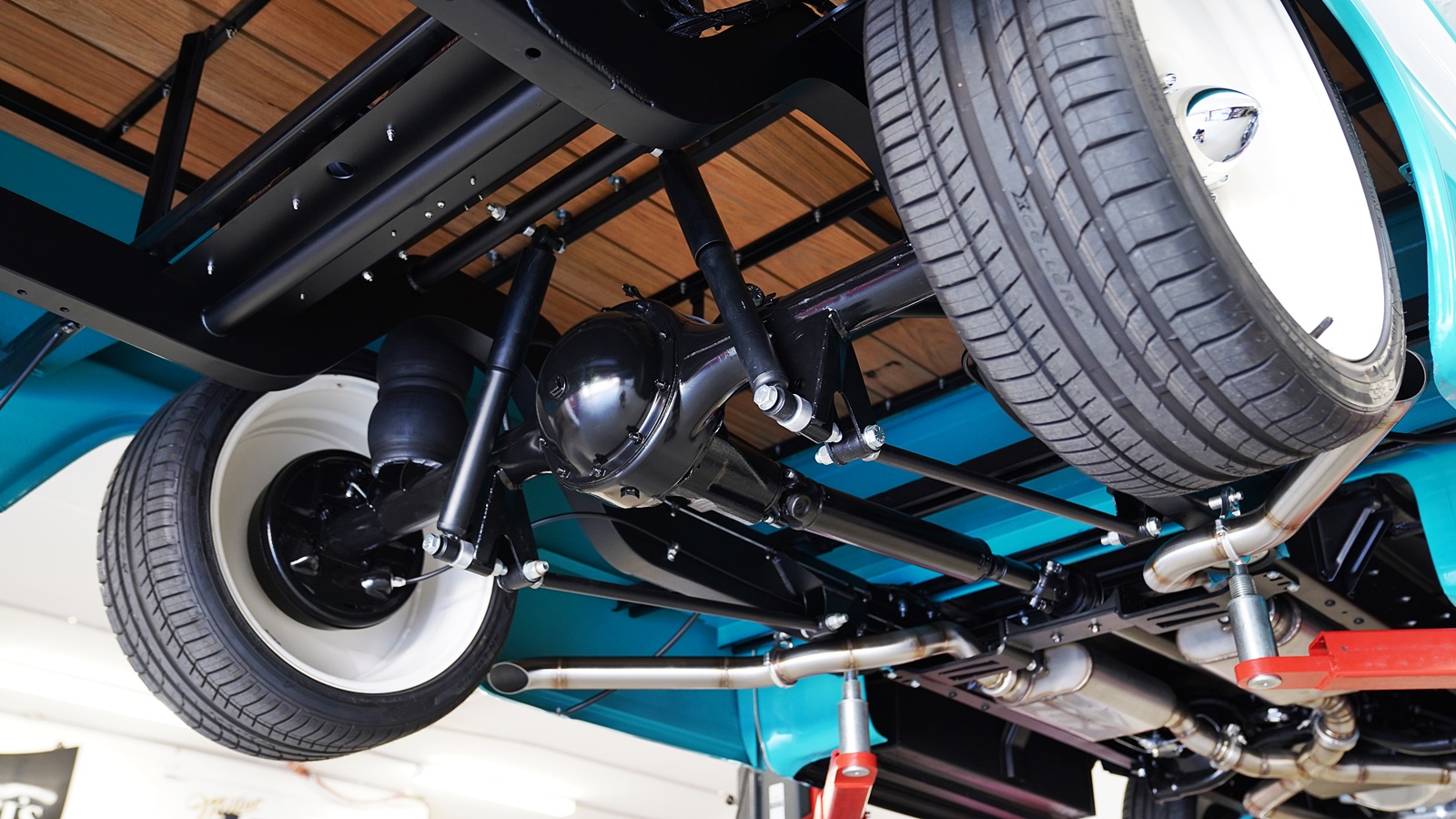 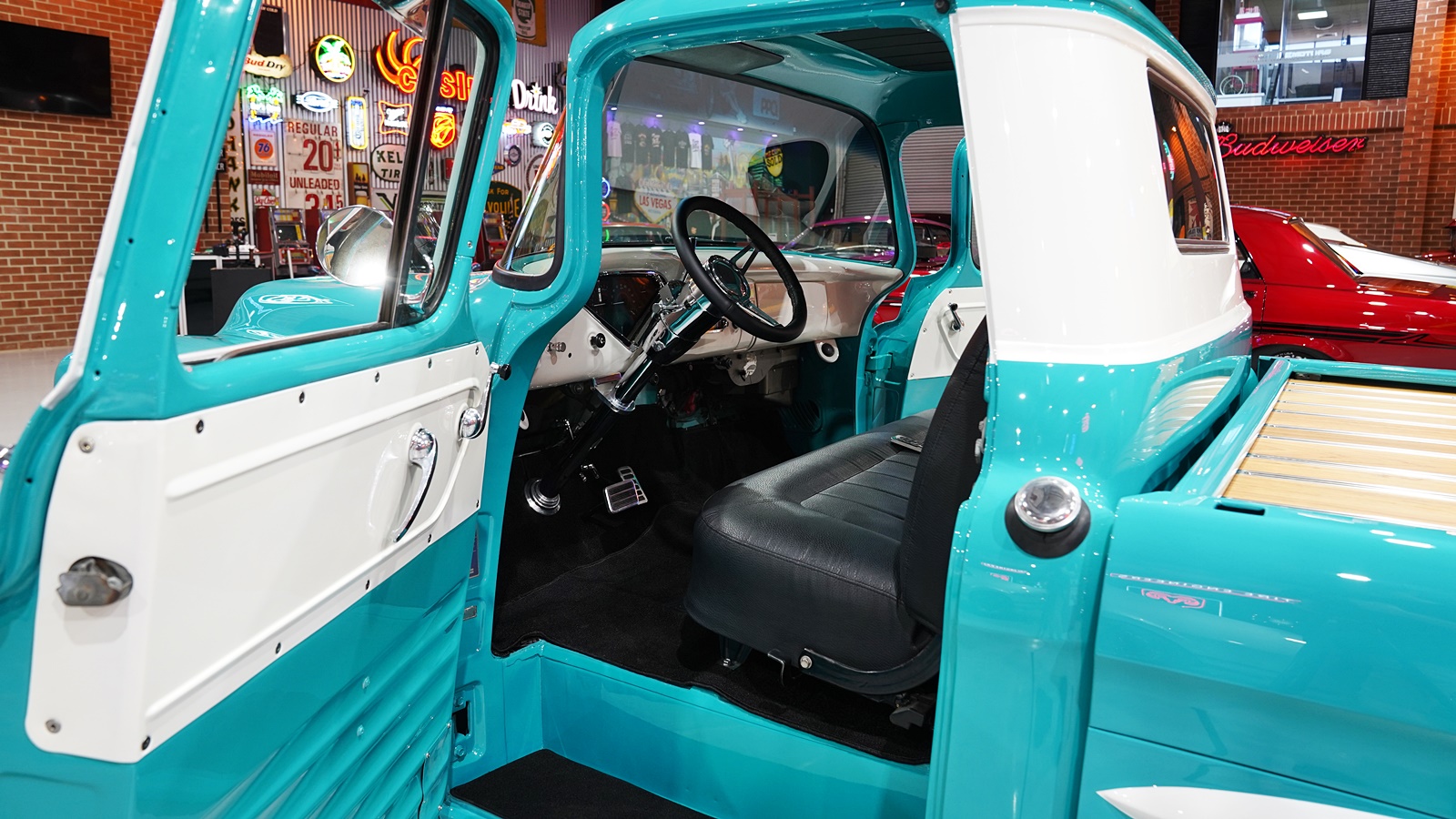 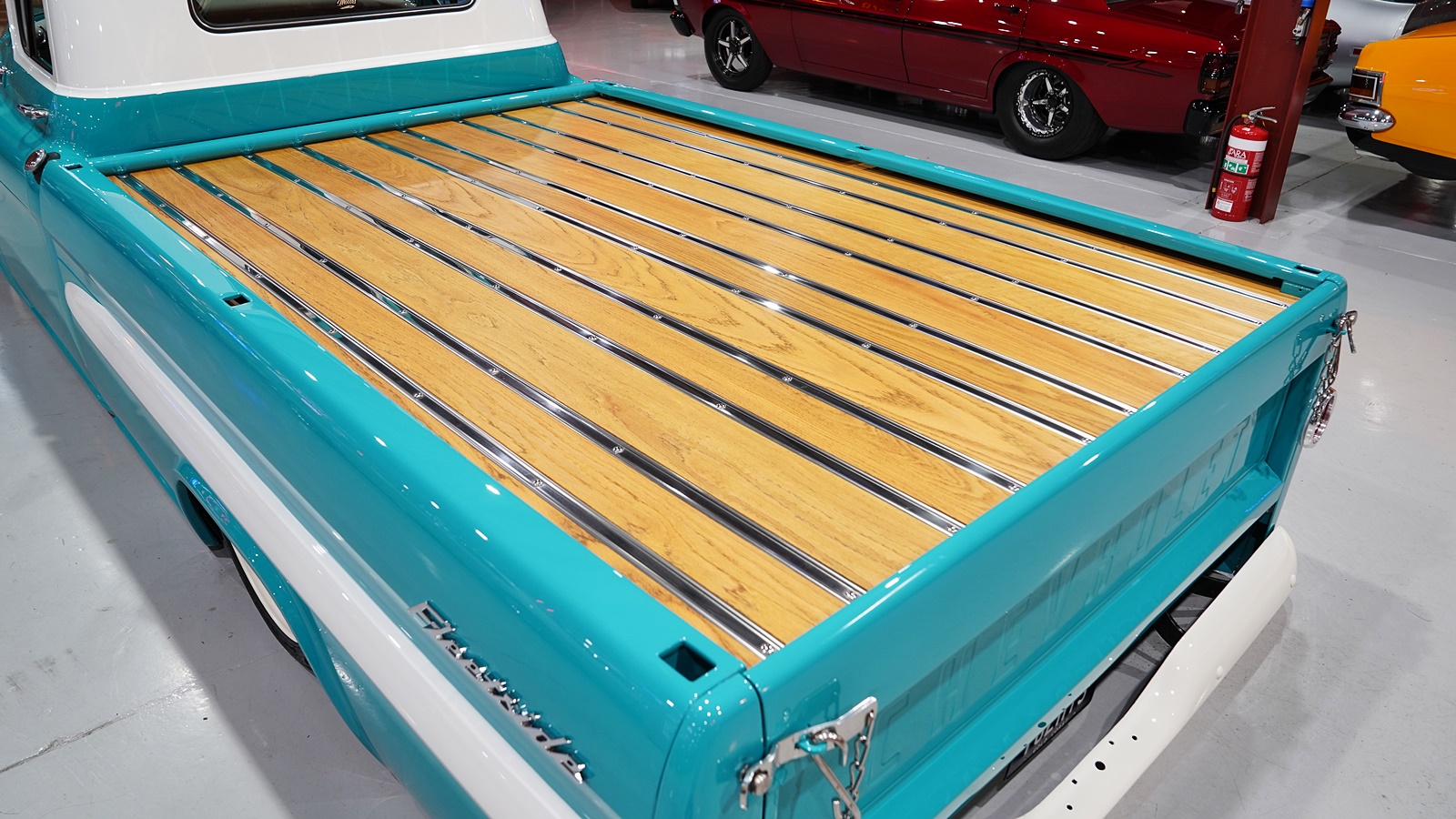 This 1959 Chevy Apache Pick up has been through a full ground up custom build. The truck was purchased by the current owner from Grafton NSW where it was being driven around on club registration as a stock straight six, drop axle pick up. When the current owner bought the truck, it took less than a day before it was being pulled down for a complete rebuild and new chassis.

The chassis now under the truck has been fully boxed for strength before receiving an entire new back half using laser cut and professionally fabricated triangulated four-link rear end. The front end ditched the old drop axle and has been converted to a Mustang II independent front end with rack and pinion power steering.  The whole chassis of the truck has been neatly painted and presents like new underneath.

The chassis is designed to slam the truck’s frame all the way to the ground using Slam bag RE6’s up front and RE7s in rear. Air management is controlled via Accuair e-level plus air management. The system allows individual corner control and is set up for self-levelling with preset ride heights but would require the sensors to be installed which are supplied with the car for this to be functional. Air for the system is stored in an Accuair CVT that has now been converted to a VT with Dual Viair 480cc compressors.

Lift the bonnet and you will find a brand new, 350ci V8 crate engine from GM performance. The engine bay is very well presented with neatly painted fire wall and inner guards and various chrome dress up engine items. The engine is paired to a GM Power glide automatic transmission and pushed to the rear with a factory pick up differential. Exhaust gasses are expelled through new block hugger headers that have been HPC coated and a full custom 2 ½” stainless exhaust system by SCC fabrications. Pulling things up is a set of power disc brakes up front with drums in the rear and an electric e-stop, push button hand brake.

The body of the truck, while presentable to begin with, was given the appropriate repairs to all the original steel before being fully repainted by Common Grounds paint and panel in Burleigh, QLD. The firewall was tidied up and any unused holes filled to make it clean. The truck has a cool factory two-tone colour scheme in teal with white contrasting highlights including grille and bumpers. The front fender badges are original but the rears have been replaced with all new bed chains on the back. Inside the tub there is a raised bed floor with an all new bed wood kit and stainless. The tail lights have been upgraded to LEDs. Finishing the mild custom but period look on the outside is a set of 20” Detroit steel wheels with spider caps and new tyres all round.

Inside the truck is just as fresh as the outside. The floors received Dynamat for sound deadening before all new black carpets which extend into the door steps. The seat is the factory bench which has been refoamed and retrimmed. The headliner is all new and there is a chrome tilt column with billet steering wheel. The dash, which houses new Dakota Digital gauges, along with the door cards are neatly painted in two tone to match the outside. For tunes while cruising, there is a new Retrosounds Bluetooth stereo with 6inch Audison speakers, tweeters mounted in the dash and DB drive sub under the front seat.

The final assembly was tasked to SCC Fabrications here on the Gold Coast who build some of the best trucks in the country. The truck is a brand new build with no miles on it since it was completed so whoever the lucky bidder is should note it will need a bit of a shake down period before you plan to jump in and drive it cross the country. These 50’s pick ups are always super popular and this one is a nice fresh build with a timeless look and a bunch of cool gear.