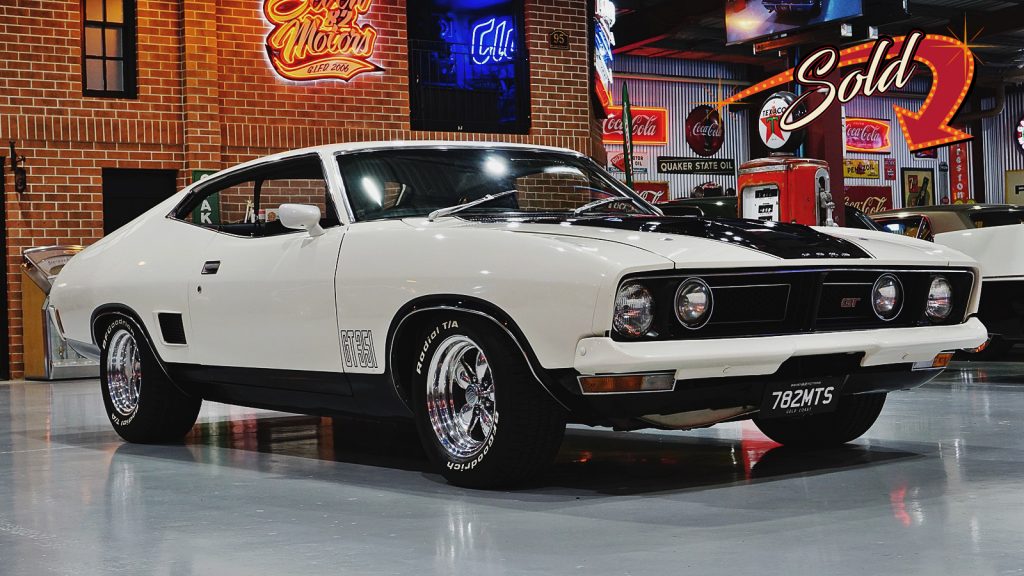 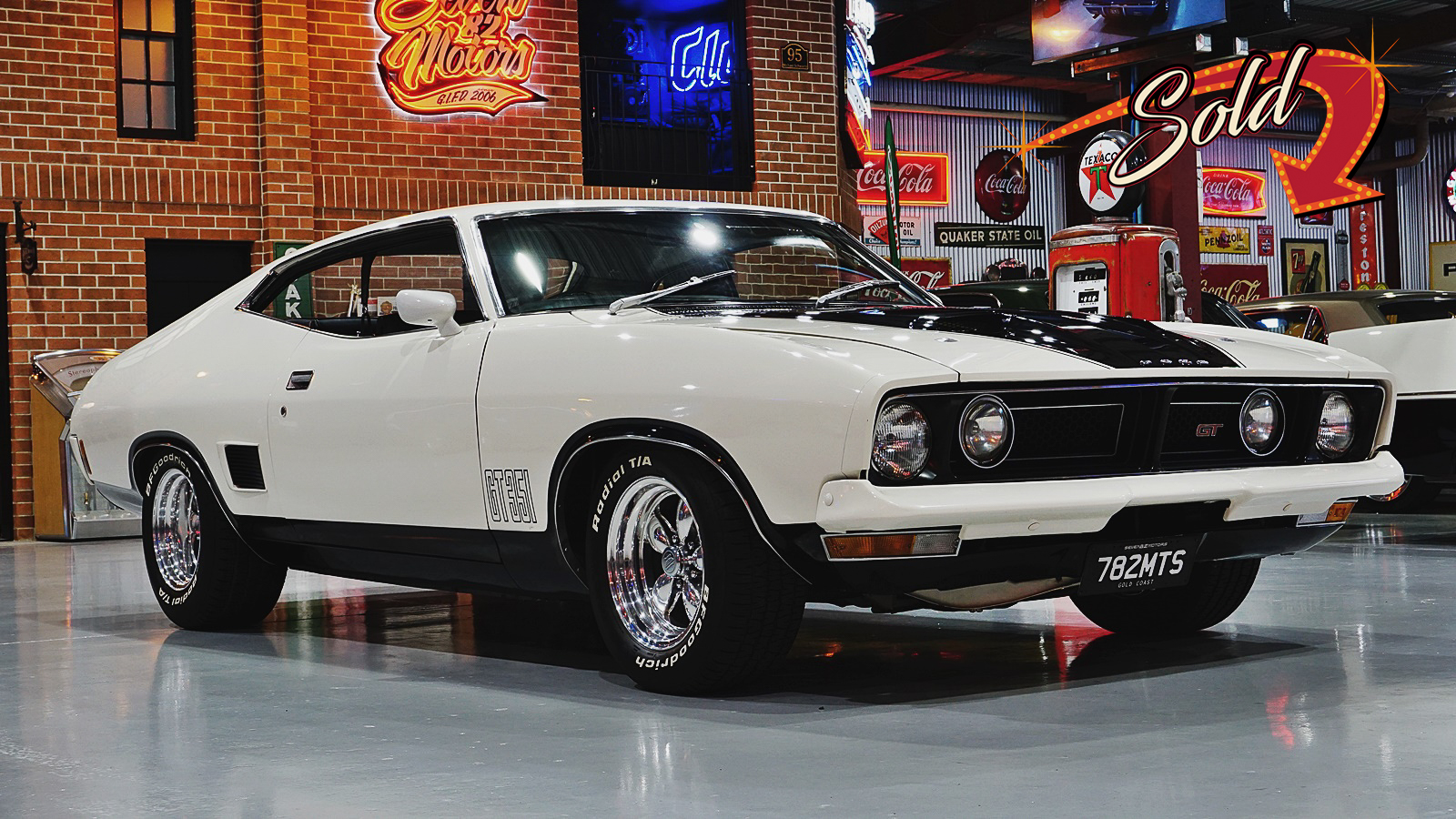 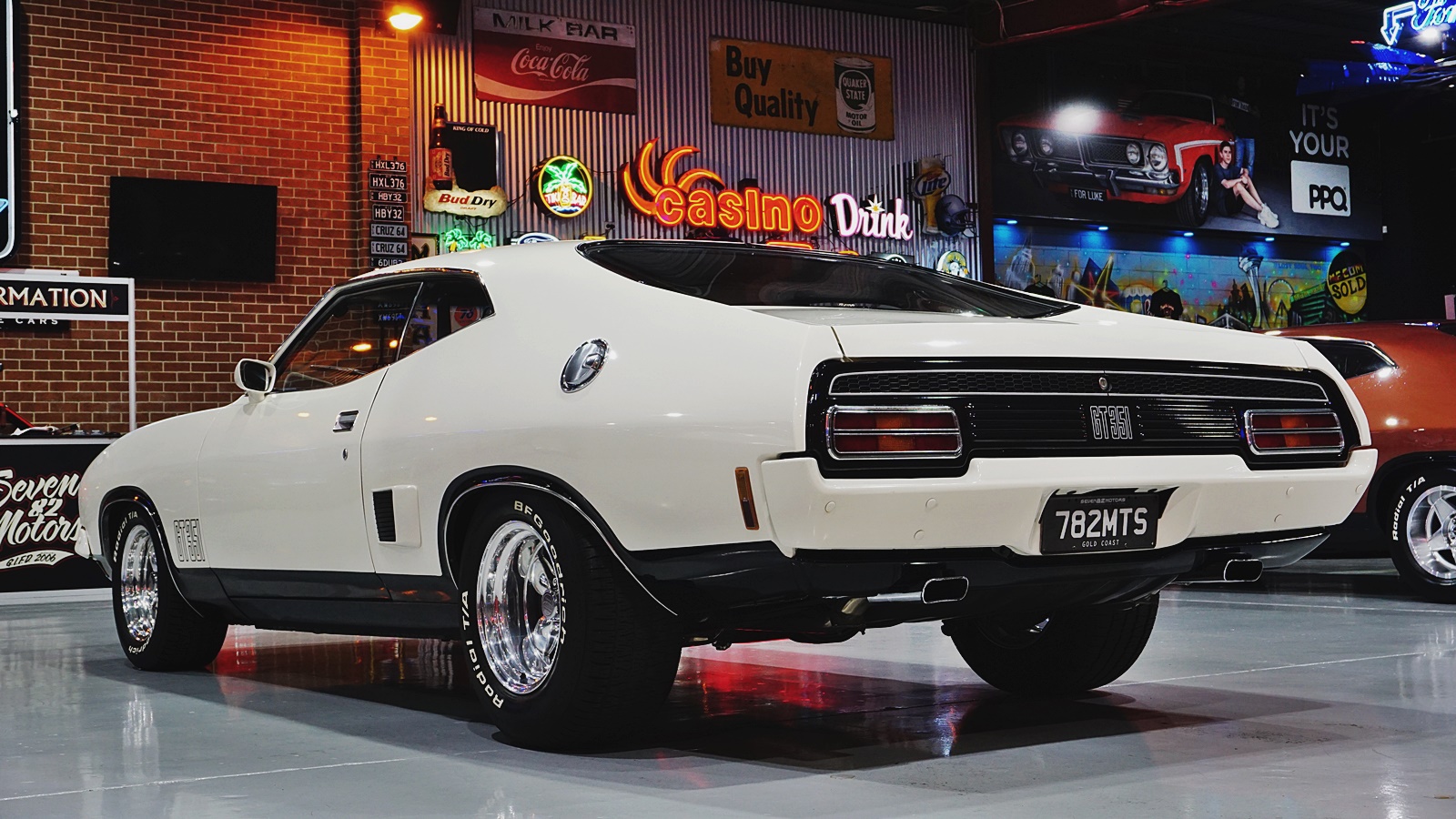 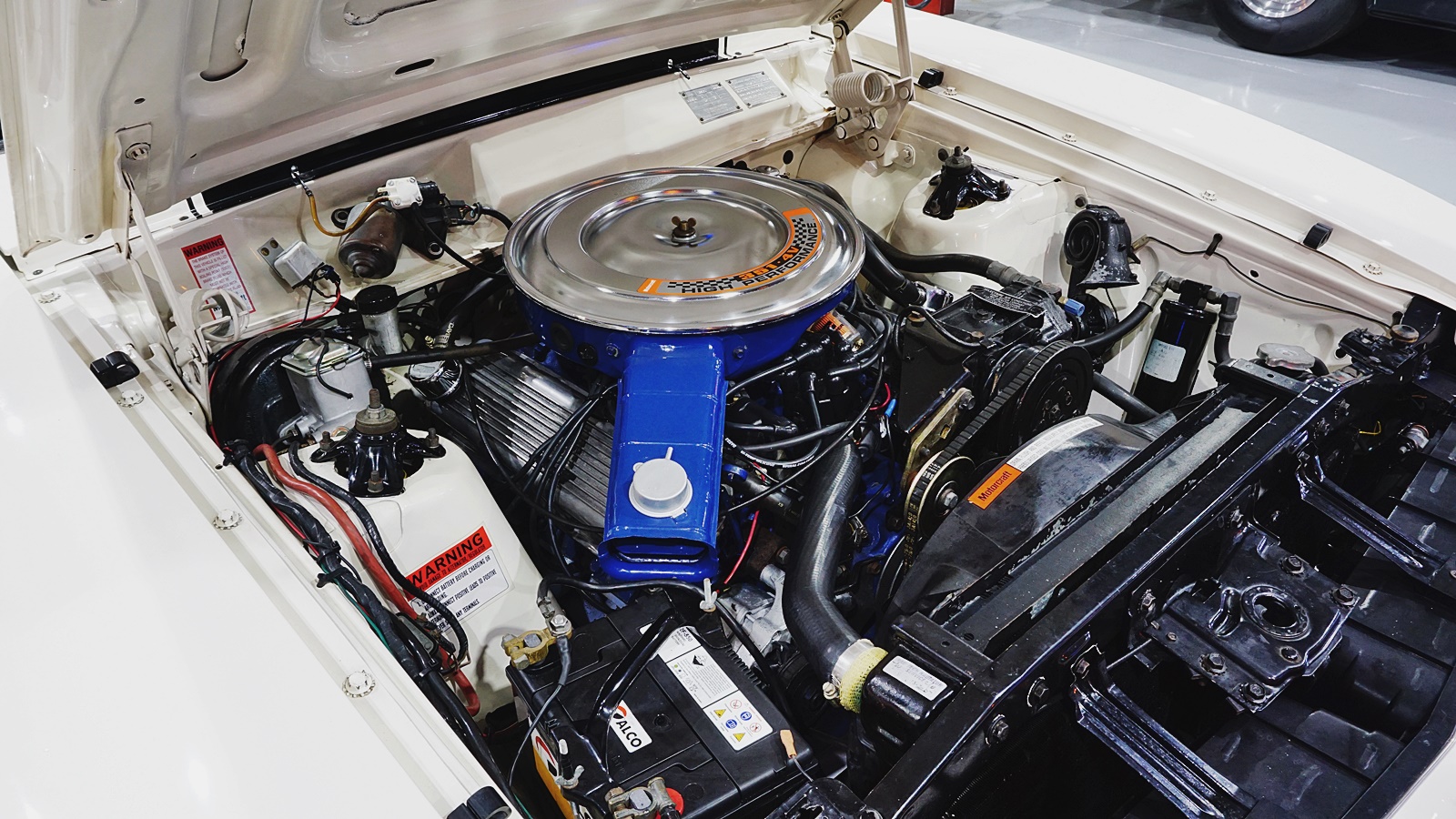 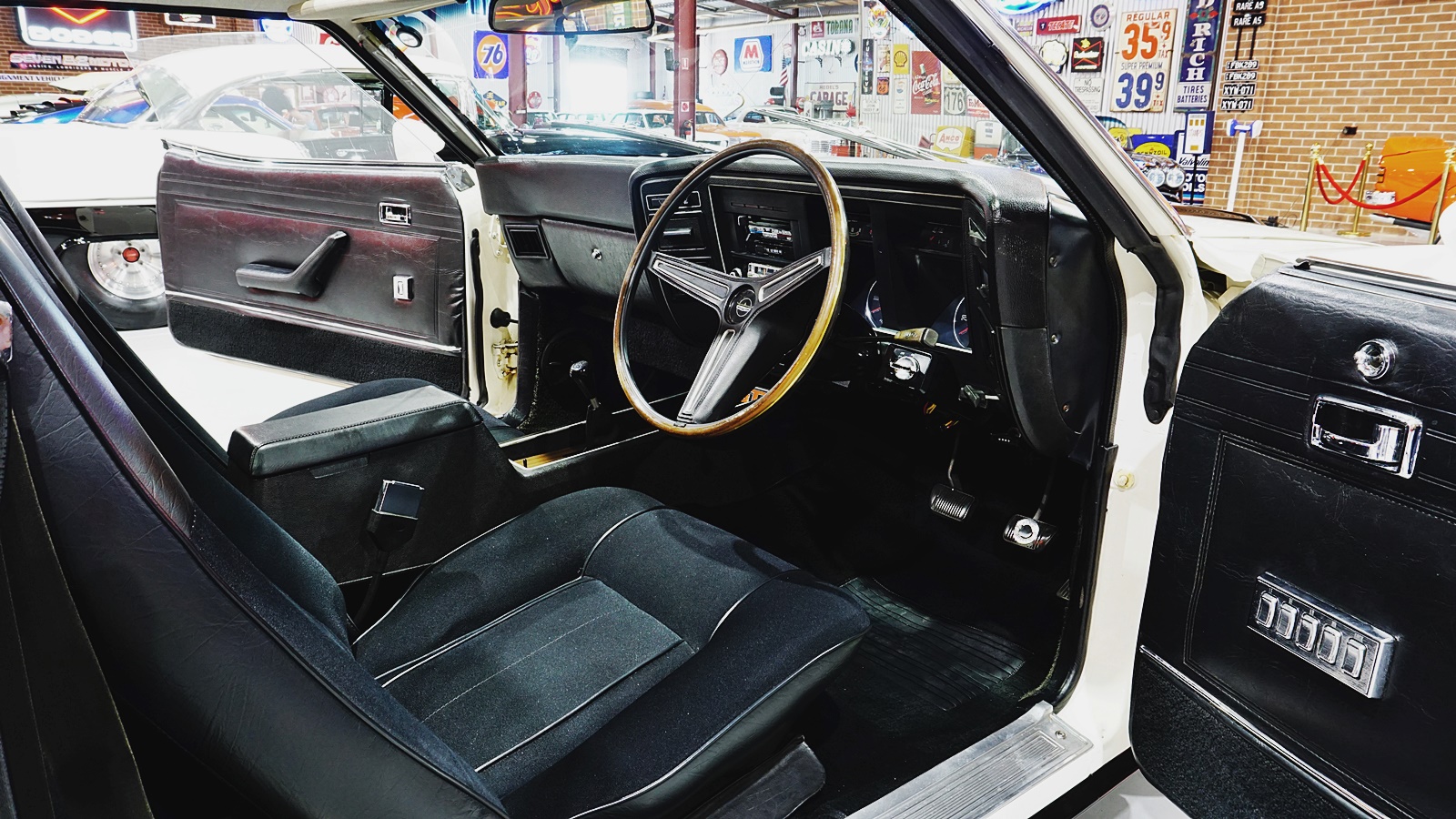 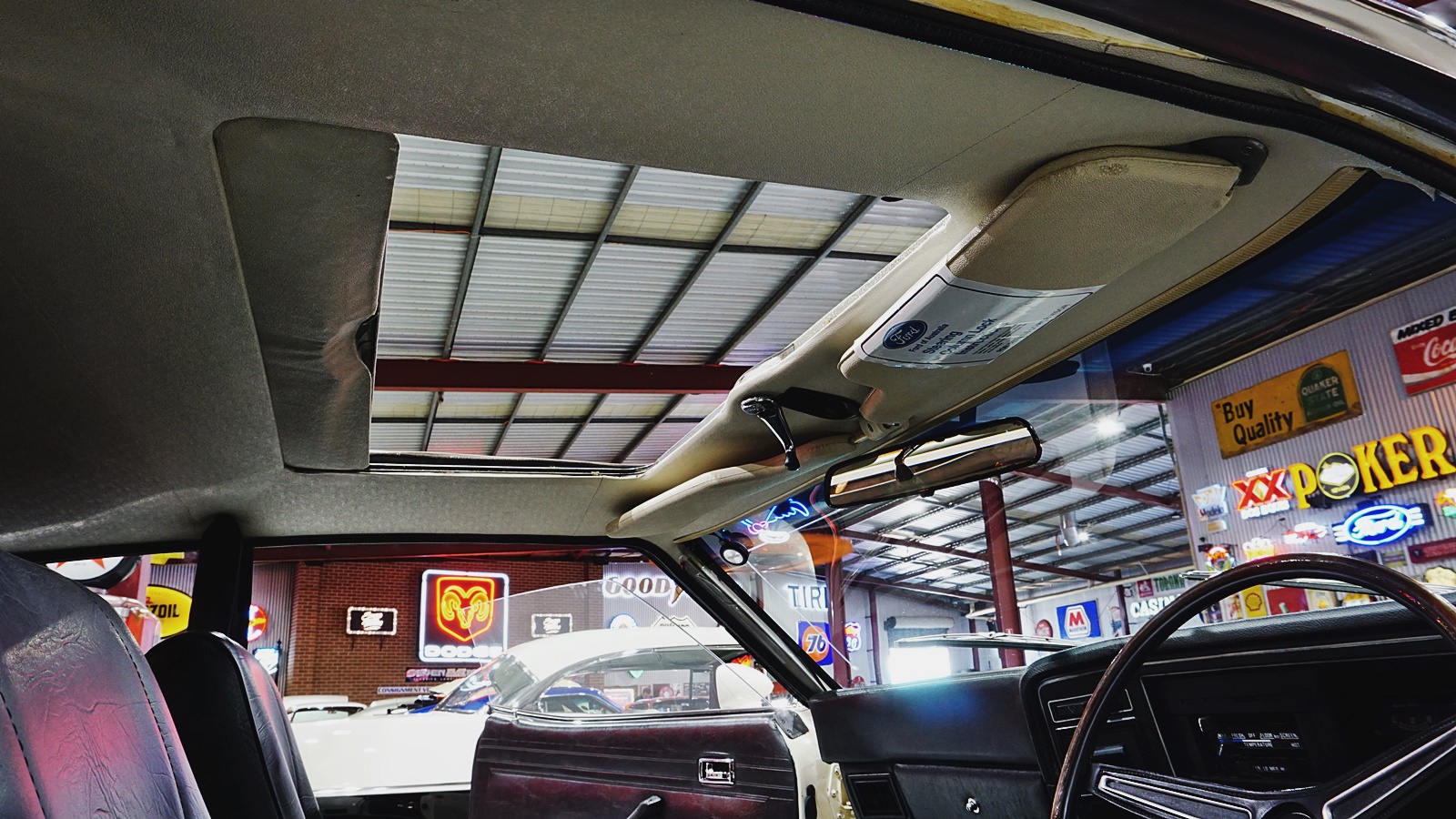 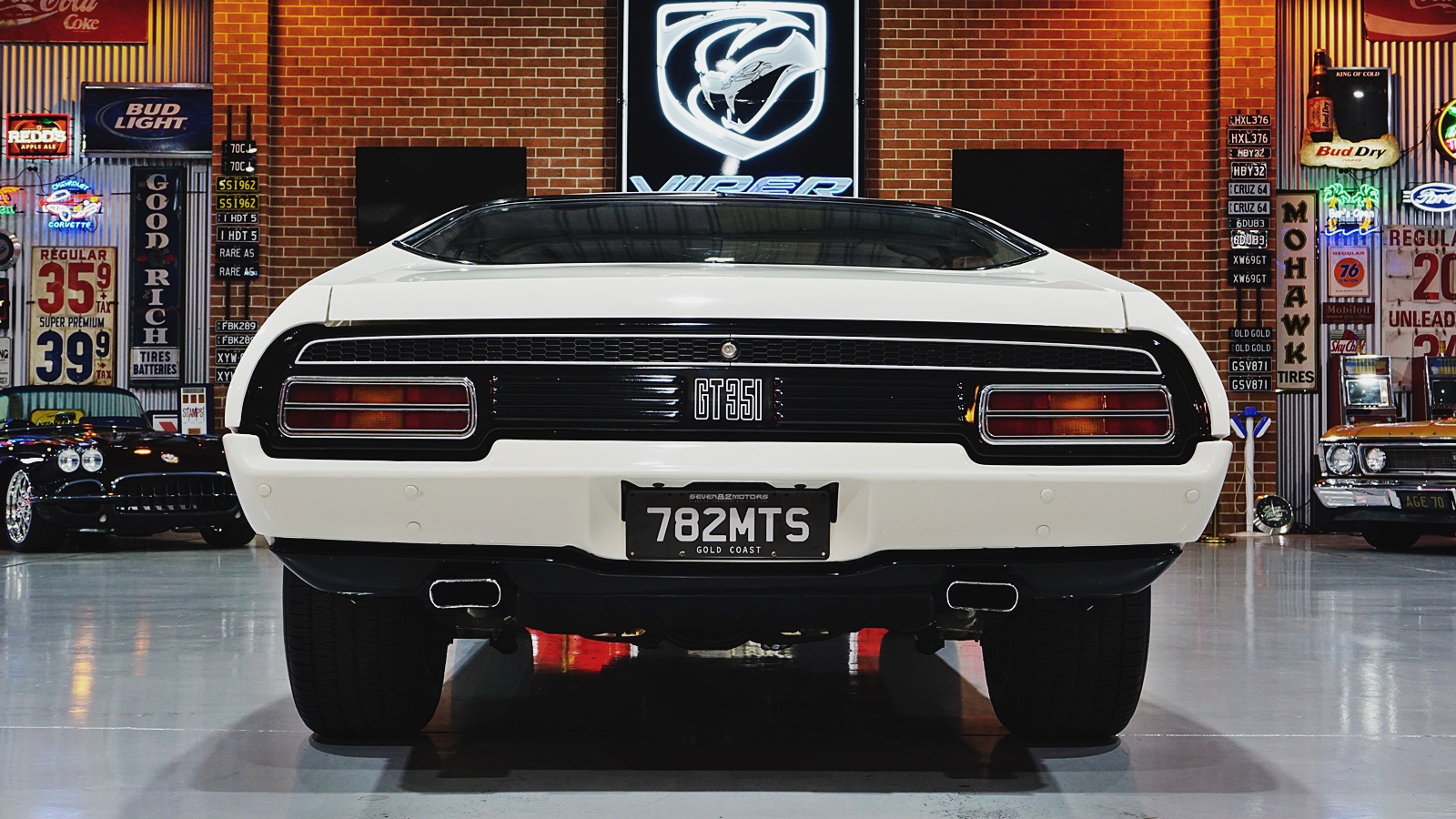 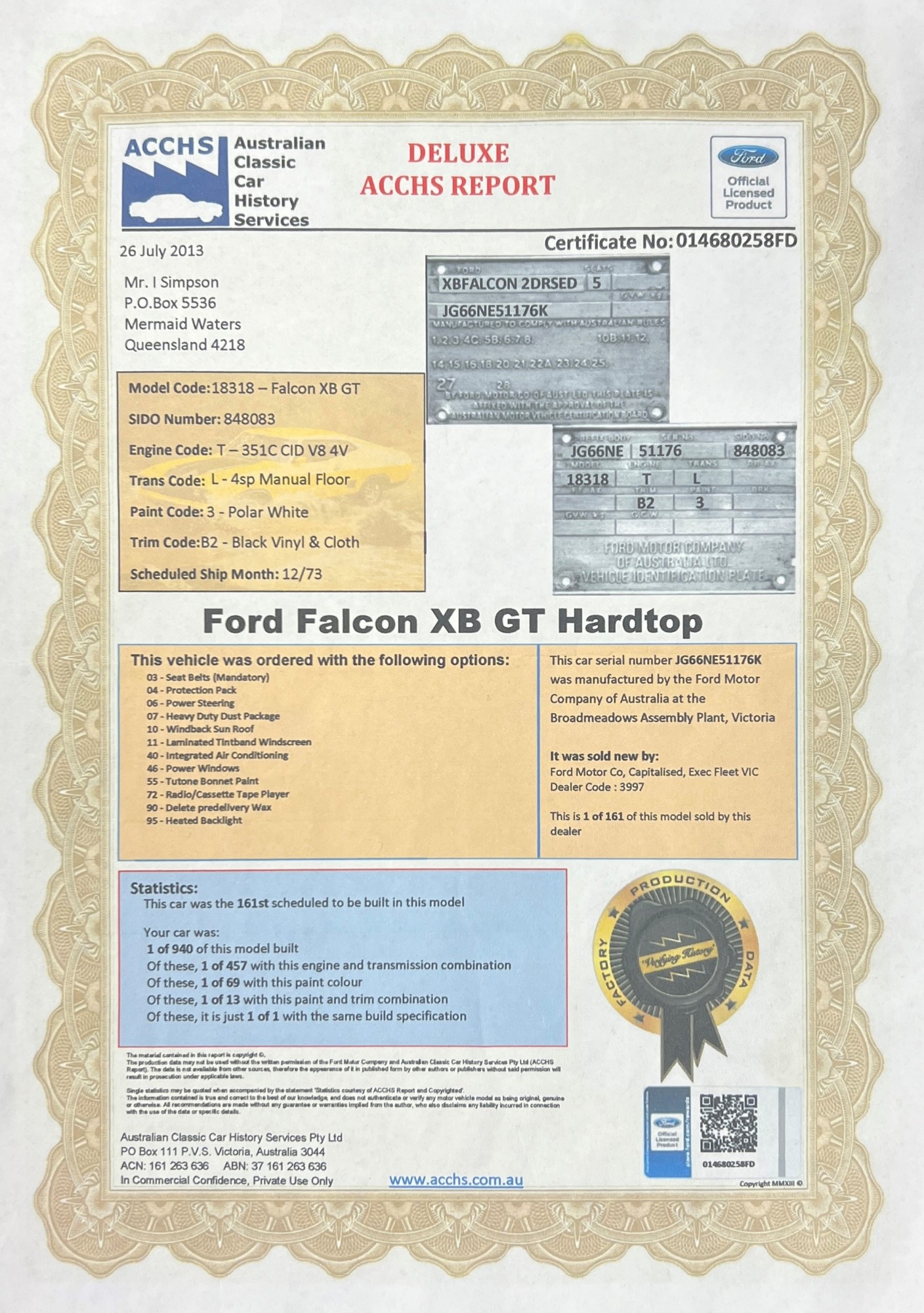 This 1973 Ford Falcon XB GT Hardtop is top of the tree as far as XB GT’s go. The car is one of the highly collectible, early build cars with the big port, 4V 351ci V8 engine from factory. These were only optioned for approx. 3 months in the very first of the XB’s before the new ADR emission control regulations snuffed the big ports out of existence at the beginning of 1974. The car is also fully loaded with options, is one of one in its build specifications and has an interesting history being a Ford executive car from new verified by the 3997 dealer code which was different to the code used  for normal employees or promotional vehicles.

The car is believed to have been part of the salary package for Howard Marsden, who was employed by Ford Motor Company to run the Ford race team at the time. The car was first registered in Victoria on the 14/12/1973 with the registration LBT-100 (we suspect this plate was owned by Ford). The car would remain with Marsden for 18 months before the registration was transferred to Victorian registration IDT-432 on 14/05/1975. The current owner was advised it was Howard Marden’s car when he purchased it approx 16 years ago and certainly seems plausible, but it should be noted we are unable to verify this ownership. With executive cars, there was an internal bidding process among the dealers to obtain and sell the cars which in this case was won by McLeod Ford who transformed the GT into one of their ‘Horn’ cars with a unique stripe package, rear spoiler and Aunger mag wheels.

in 1975, Mcleod sold the car to a gent in Sydney who moved to Drayton, near Toowoomba, QLD shortly after purchasing the car, and changing the rego to QLD registration OOT-886. Then in 1976, the car was purchased by Peter Leeson . The current owner and Peter are still in contact and Peter confirmed that when he purchased the car in 1976, the car was fitted with the Horn stripes, spoiler, Aunger wheels, a 780cfm Carburettor and an unusual big tank (which is still in the car today). It is unclear if the carburettor and big tank (not listed on the factory option sheet) were fitted by Ford, Marsden through race team development or at Mcleod as part of the Horn upgrades. 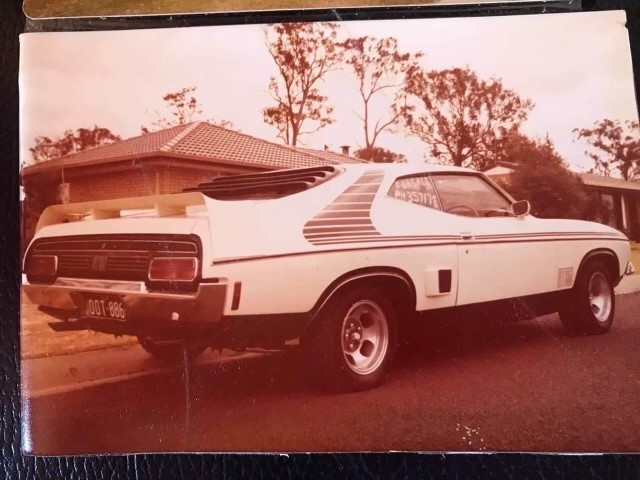 Changing hands a couple of times locally in the 80’s, Peter sold the car in 1981 to Stan Kretchmann for $6,800 Who then sold the car 18 months later to Darrell Chant for $6,000. In approximately 1984, Darrell Chant sold the car to the Olsen Family in Toowoomba. The Olsen family are a well known family in Toowoomba who have owned the local bike shop for generations. The car was purchased for a sum of $3,800 by the Olsen’s but rather than being used, the car was parked up for 20 years.

Fast forward to 2004 and the current owner purchased the car from Peter and Elizabeth Taylor who had obtained the car from the Olsen’s and had dismantled the car and put it into a paint shop for refinishing of the paint work. The car was stripped completely but everything was there. The current owner is part of a motor racing family, he was a three-time, Australian Formula Vee champion in the 80s, has won his class in the Bathurst 3 hour and owned a V8 supercar team in the early 2000’s. He has also raced some production cars, and his sons and grandsons both race cars. As you can imagine, he was well equipped and had the right contacts to put the car back together the right way. The new owner had the shell painted and the car was reassembled over the following months.  Using his race engine contacts, the original engine was rebuilt by Swift Engine reconditioners. The block was bored 20 thou over, crank ground 10 thou, heads were modified for unleaded fuel and a mild cam added. In 2006, the transmission was dismantled, inspected and given a mild overhaul. Any items that needed to be refurbished were done, A-Arms, rotors, pads, ball joints, and bushes. The car received pacemaker headers and full stainless steel exhaust system.  Other recent work includes a new master cylinder. The vehicle indicated 44,000 miles on the clock when purchased by the current owner. The odometer was reset during the reassembly and the car now shows 1,770 miles which is all the car had travelled since the car was reregistered in 2007.

This has to be one of Australia’s most desirable XB GT Falcon Hardtops!

One of one specification

ONLINE BIDDING FOR CLASSIC CARS STARTS MONDAY 14TH OF FEB AND ENDS FROM 7PM MONDAY THE 21ST OF FEB.