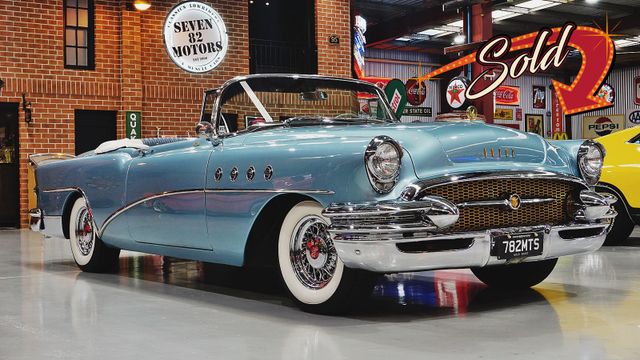 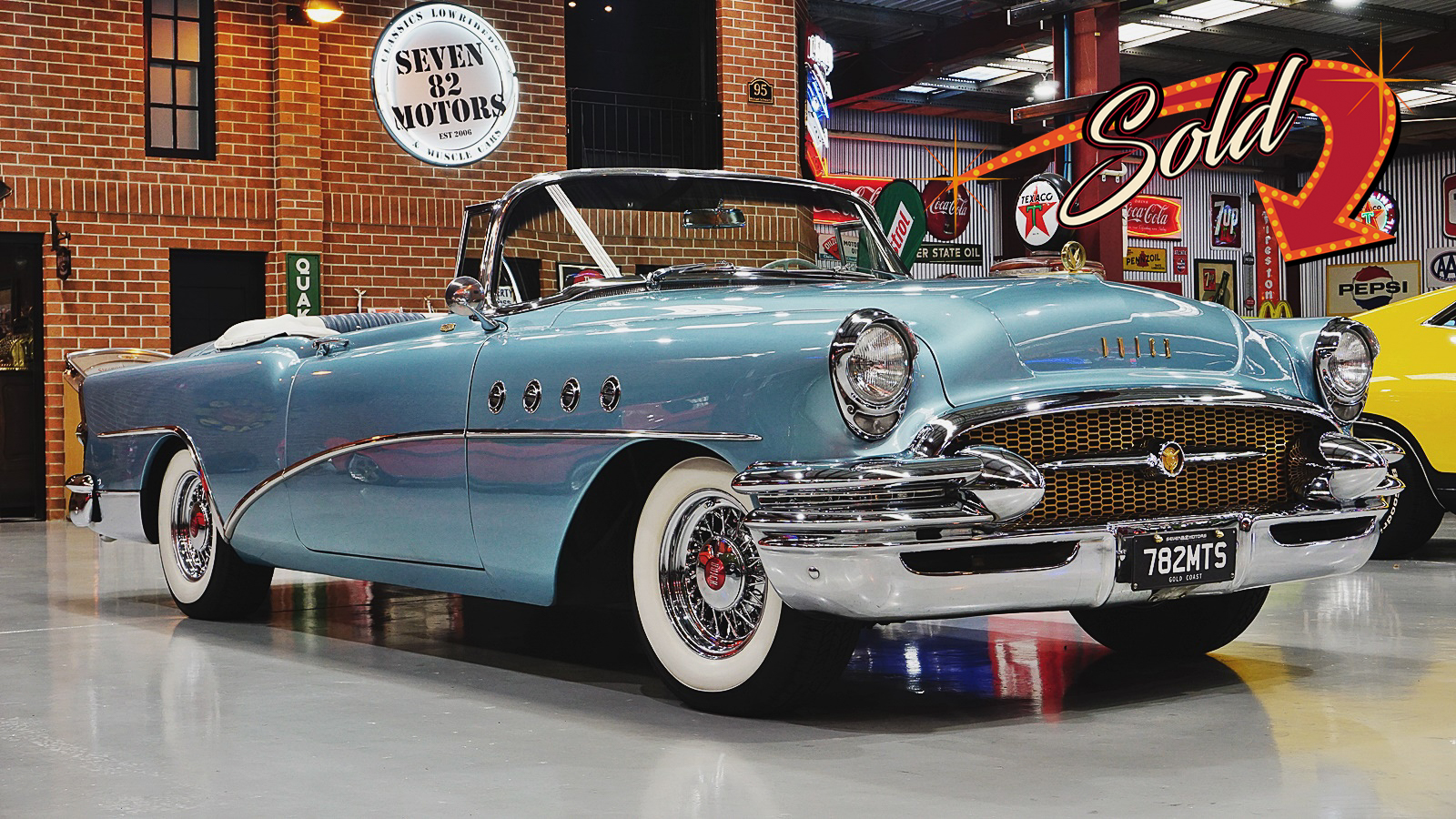 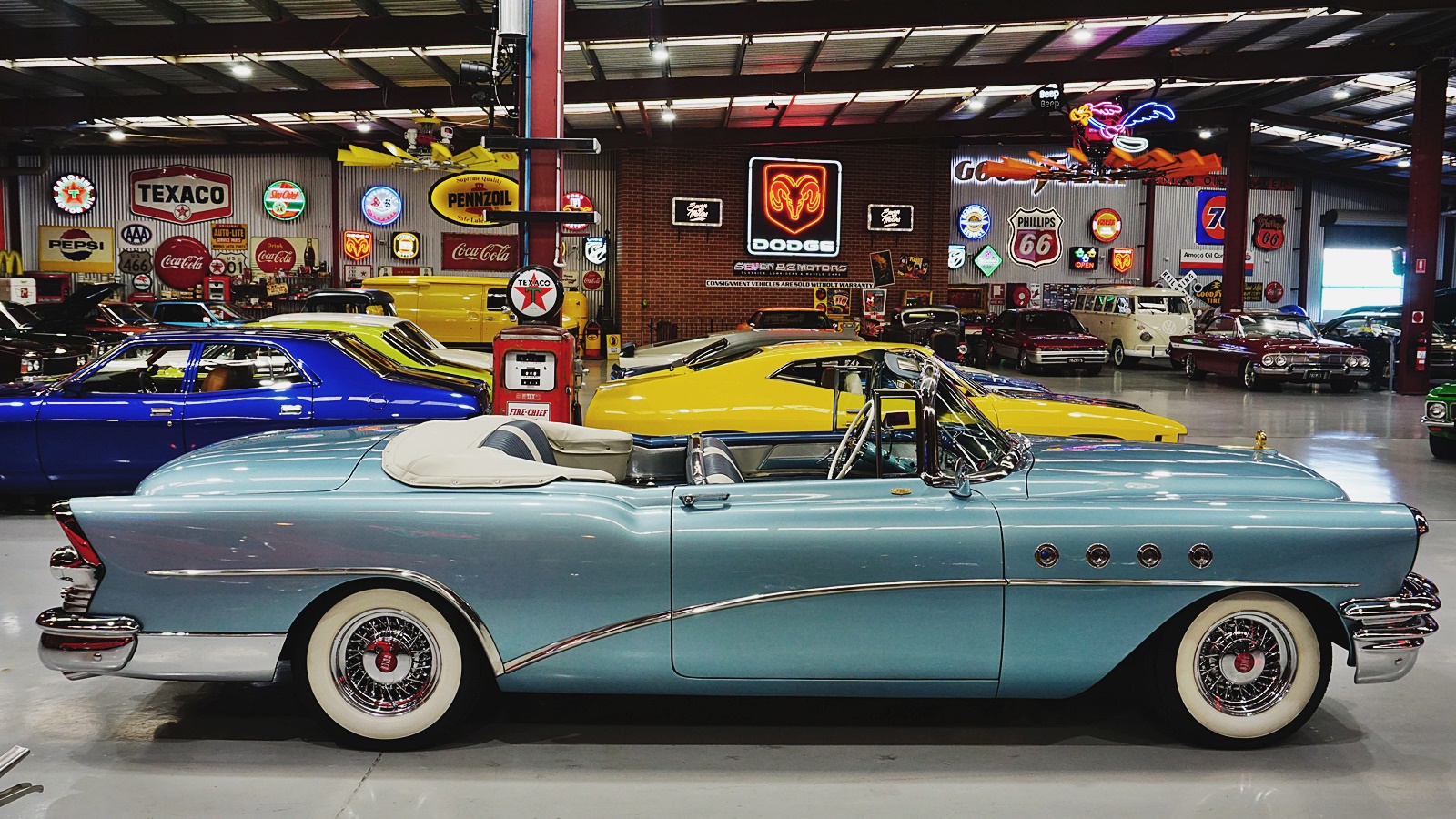 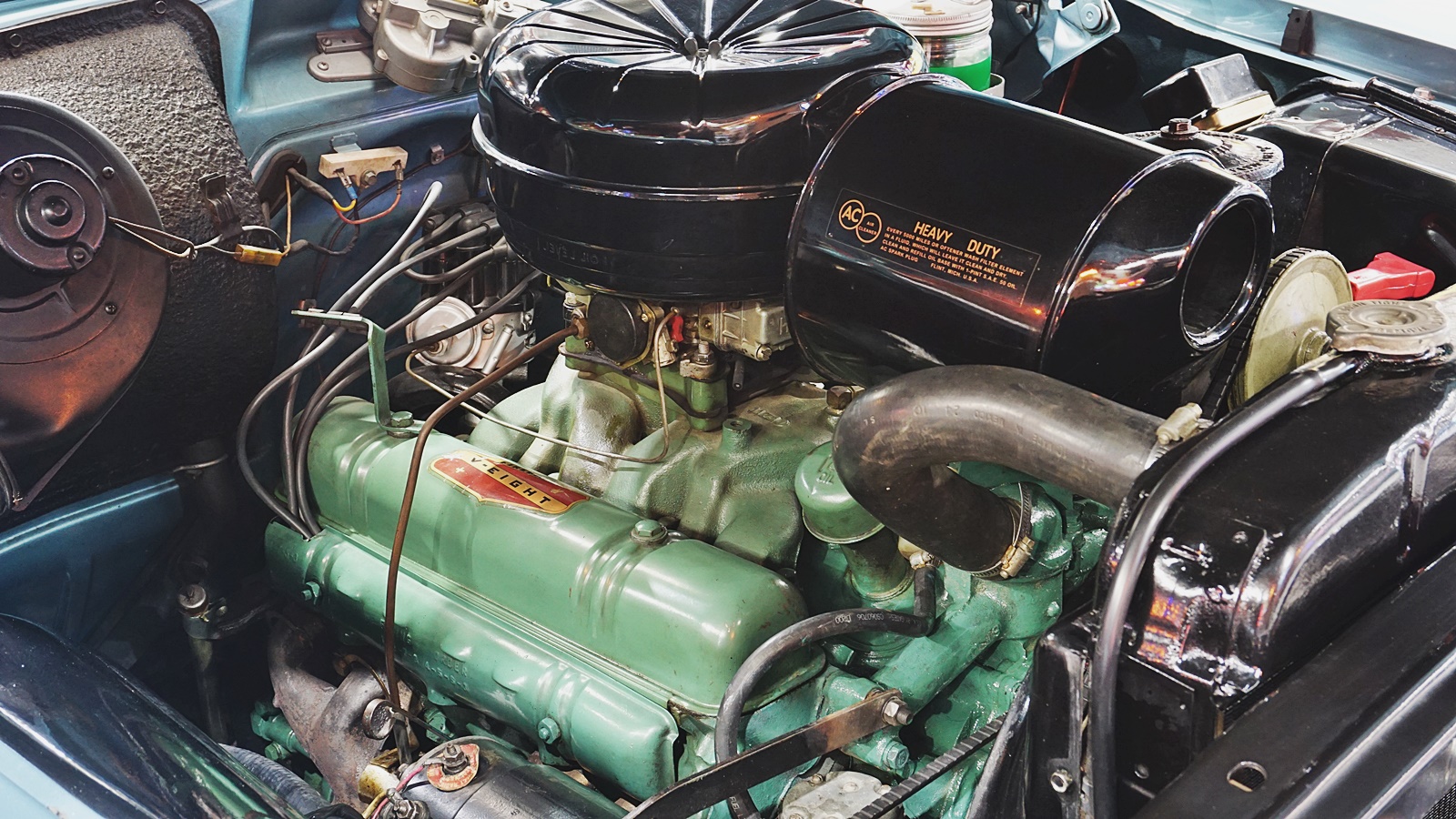 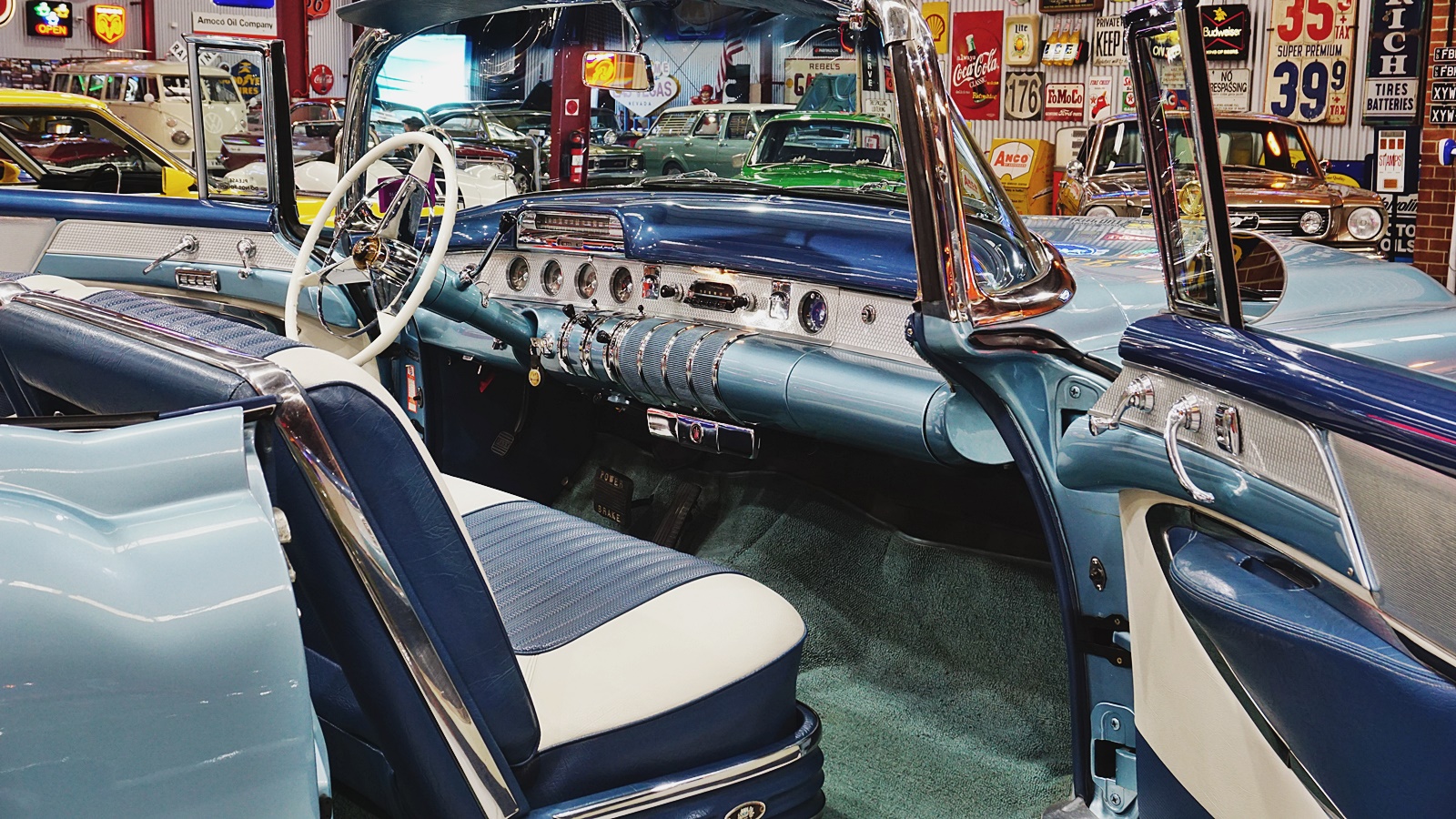 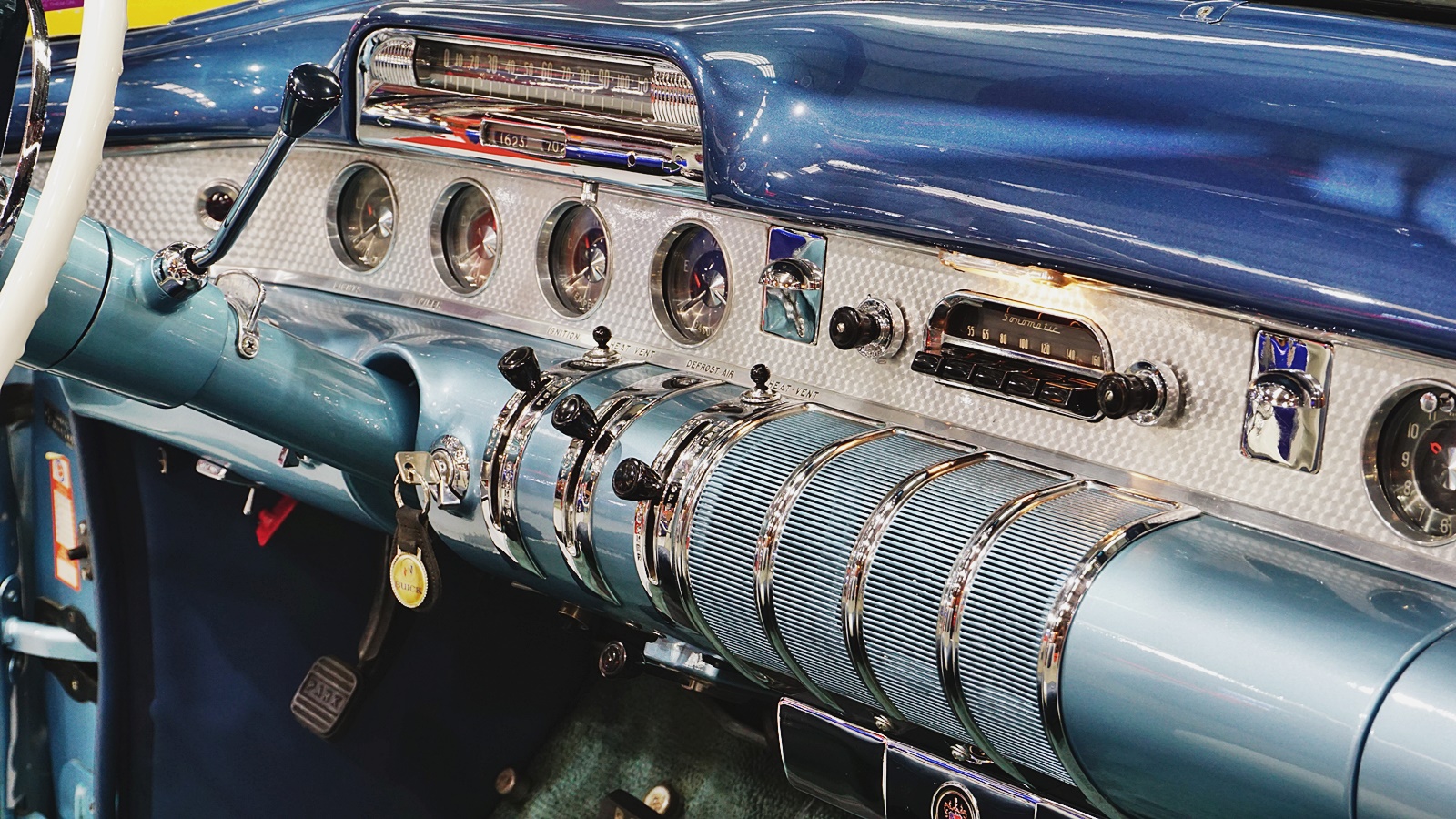 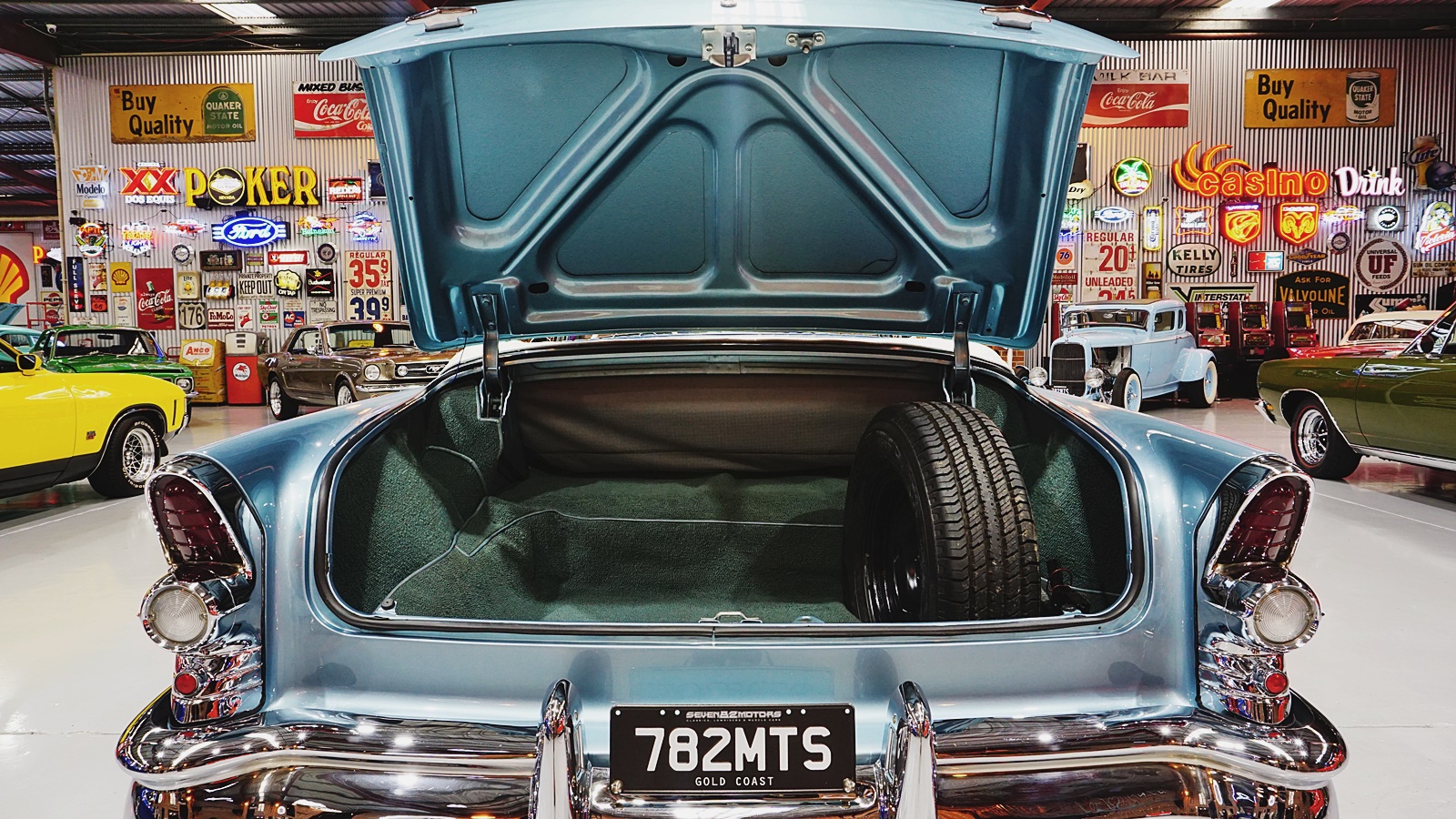 This is a beautiful example of a fully restored and extremely rare 1955 Buick Roadmaster Convertible. Very seldomly does the opportunity to purchase a car like this present itself…one of only 4,730 Roadmaster convertibles ever made and Buicks’ answer to their top of the range luxury convertible. It’s to be noted that the Buicks came in two sizes, the “Chevy” sized Century and Special models and then these, the largest of them, the Super and the top of the tree, the Roadmaster. Roadmasters shared General Motors C-body with the Cadillac and Oldsmobile 98. All Roadmasters came with factory power steering, power brakes, power seats, power aerial, radio, power windows and power convertible top. In 1955 there were a few external styling features which allowed a Roadmaster to be distinguished from other models. These included stainless lower rear fender bands, gold-coloured Roadmaster deck script and hood ornament, bars on the hubcaps and gold-accented grille.

The car has been with the current owner for 13 years, having purchased the Roadmaster sight unseen from America in 2008. He remembered seeing one here in Brisbane, Australia in the 1960’s and it had left an impression on him ever since. The car was always purchased with the intention to fully restore it. When the car arrived in Australia, it was in very good condition body wise but a little tired throughout. The car was pulled down and stripped to bare metal before being restored in its factory Stafford Blue metallic. The chrome and bright work on the car have all been refinished or replaced and shines brightly in the sun. Likewise, the power convertible top was refurbished with new hydraulic rams and recovered to present as new. The look externally is completed with chrome wire wheels and Coker wide white wall radial tyres.

Lift the bonnet and you will find the original 322ci Buick ‘Nailhead’ V8 engine. The engine has been rebuilt with hardened valve seats to run on modern unleaded fuel. The engine bay presents as factory with high attention to detail to ensure it is as correct as possible. The engine is paired to the factory Dynaflow automatic transmission which was also fully reconditioned. Underneath the car, the suspension is all new and the factory differential has been rebuilt.

Moving to the interior, the upholstery has been completely restored back to factory specifications. All gauges were restored, and the dash looks as good as the day it left the factory. The power windows and power top function as they should. The automatic transmission paired with power steering and power brakes makes for a great cruising ‘50’s classic. The car has been restored to completely factory specs except for a revised start button mounted under the dash to do away with the complicated accelerator pedal starter these cars had originally. Another nice touch is the hidden CD player which is installed behind the chrome accessory tissue box and hinges out of the way for access.

Since the car has been completed and on the road, it has won a multitude of awards including ‘Best Convertible’ twice at the QLD Hot Rod Show. The car is a credit to all tradesmen involved in its restoration and this is another car we are truly proud to represent.